It wasn’t supposed to happen this way.  It was supposed to be simple, a routine winter getaway to warm Costa Rica. Bags were packed and we were ready for an early morning departure.  But then, much to our surprise, Winter Storm Landon appeared on the scene and everything became complicated.  As we were getting ready to retire for the night, a text message from the airline informed us that our morning flight had been cancelled.  Complication after complication followed that initial text.  Eventually, in the middle of the night, we were able to purchase tickets on another airline for the next day, the day after our originally scheduled departure.  But we made it to Costa Rica even if it was a day late. 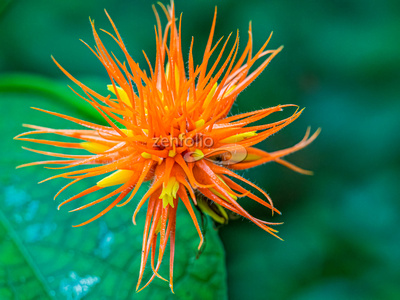 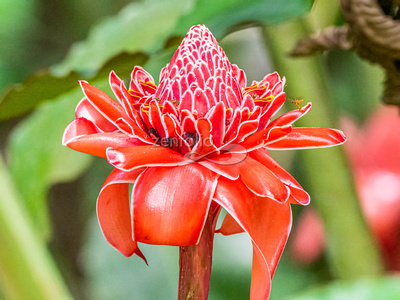 In preparation for our trip, we had arranged a customized itinerary with a local tour company Costa Rica Focus, which also included a private naturalist guide/driver.  The itinerary consisted of extended stays at three different locations, Manual Antonio National Park on the southern Pacific Coast, Arenal Volcano National Park in the highland rainforest, and the Sarapiqui region of the Caribbean lowlands.  At each of these locations, Costa Rica Focus had arranged for private wildlife viewing and photography at various ecological reserves and private biological conservation sanctuaries.  This was a twelve day, all-inclusive tour for just the two of us with Minor Hidalgo, our guide/driver, taking care of everything. 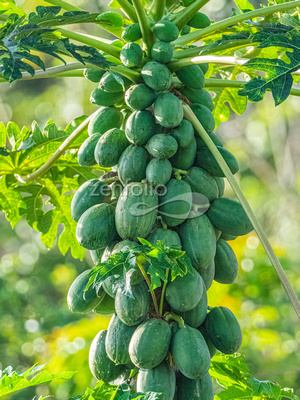 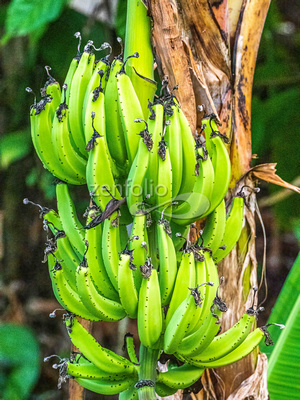 After all the turmoil dealing with airline issues it was a relief to settle in at the Hotel Playa Espadilla adjacent to Manual Antonio National Park.  We were more than ready to enjoy the warm humid air, appreciate the remote jungle setting, and marvel at the diversity of wildlife.  Most of Costa Rica’s wildlife consists of birds with 850 species.  During our travels, Minor Hidalgo helped us locate and identify 155 species and I was able to photograph more than a hundred of those, with about half being species I had not photographed before. 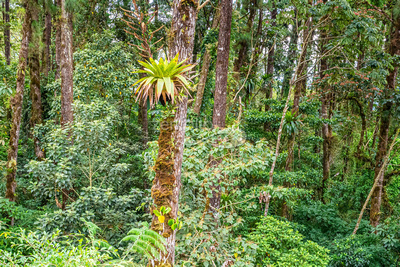 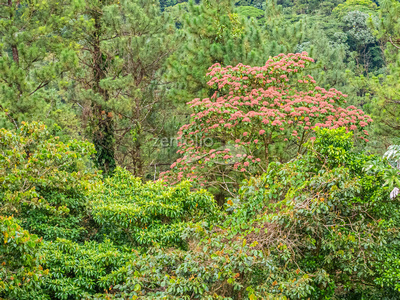 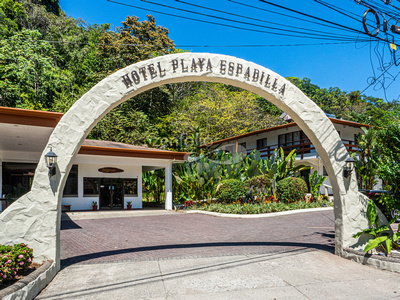 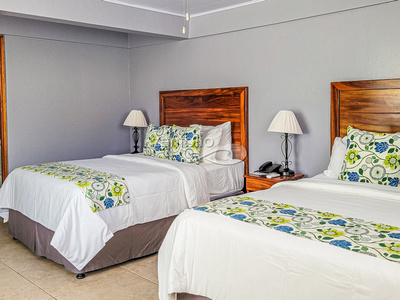 Arrangements for this Costa Rica adventure were made well in advance of the actual trip.  So it came as a bit of a surprise to us that the trip coincided with my 83rd birthday.  We celebrated with dinner at El Avión, a very unique eatery at Manual Antonio where a C-123 Fairchild cargo plane had been converted into a pub and restaurant.  Now the pressure is on me to contrive a similar birthday experience for Jane. 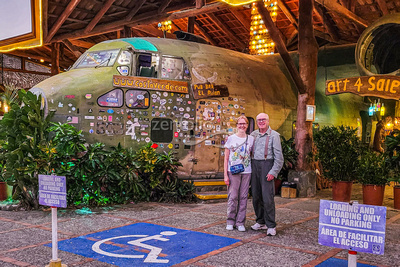 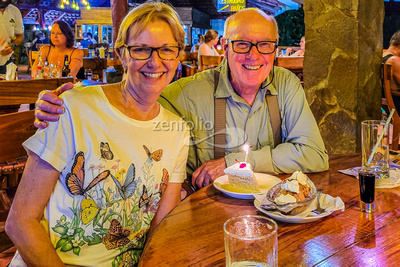 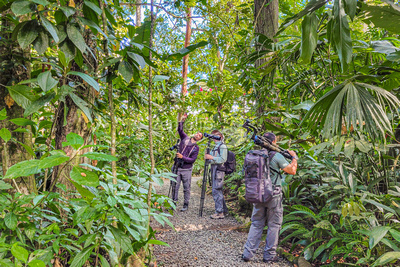 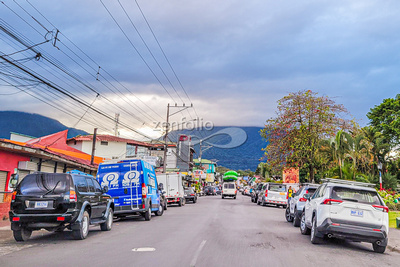 At Manual Antonio, Costa Rica Focus’ itinerary included a private mangrove boat tour.  This excursion was tide dependent and required a pre-dawn departure from the hotel.   Jane and I had kayaked through a mangrove before in Baja California but that was nothing like the Costa Rica mangrove.  Here the various mangrove tree species were huge with a dense jumble of tangled roots reaching up from the water.  The narrow water ways gave the impression of boating through a jungle.  We encountered several new bird species including the diminutive American pygmy kingfisher and the very large bare-throated tiger heron. 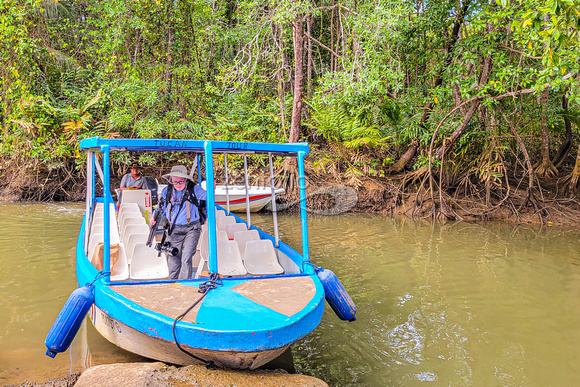 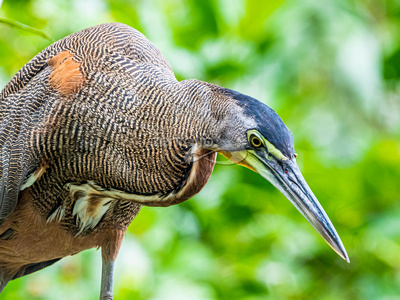 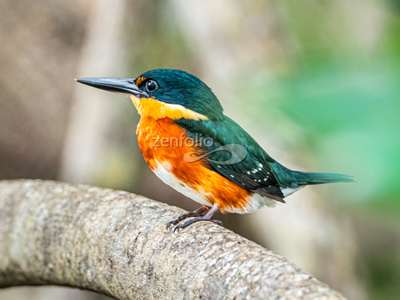 Our next destination was Arenal Volcano National Park where we stayed four nights at the Arenal Observatory Lodge.  Outings from here included Ecocentro Danaus, a private ecological reserve, Mistico Hanging Bridges, with its 16 bridges suspended through the rainforest canopy, and Arenal Natura, where we were able to photograph tropical frogs and reptiles.  All these were private visits for just the two of us and our own guides.  We also spent a lot of time searching for and photographing birds around the Arenal Observatory Lodge.  Playing birds songs recorded on the Merlin app on his smart phone, Minor was able to entice small songbirds to approach close enough to be photographed. 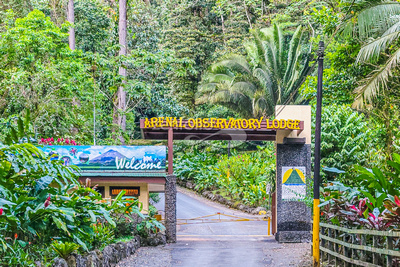 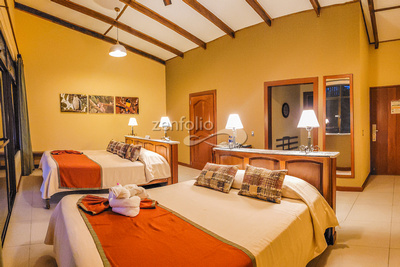 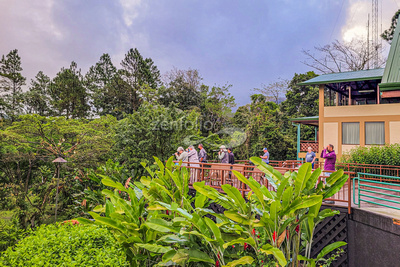 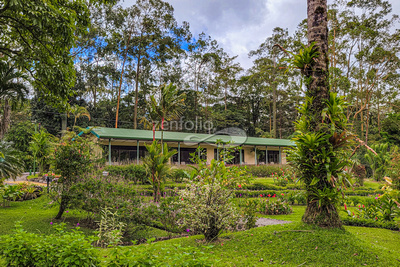 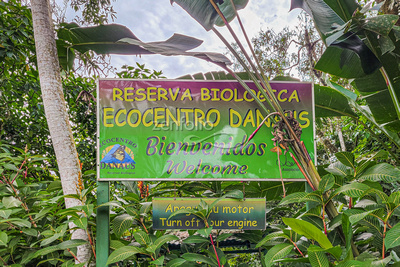 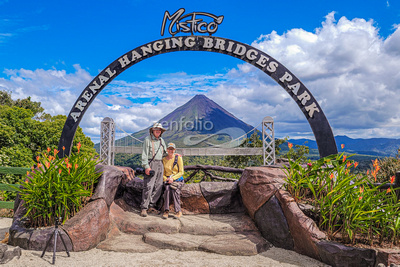 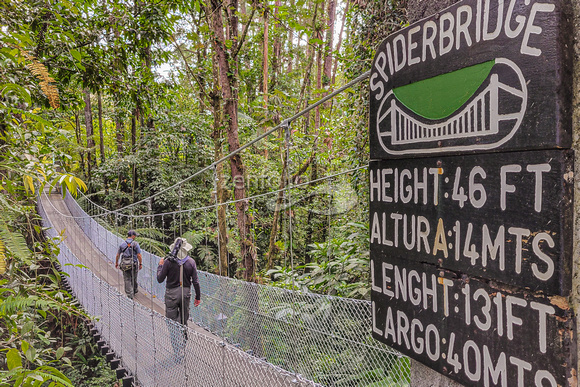 Ara Ambigua Lodge, a friendly family run hotel, was our last accommodation.  In addition to photographing birds feeding on melons and bananas provided by the lodge staff, Minor also led us on explorations of area pastures to locate other Costa Rica birds including macaws, parakeets, tanagers, woodpeckers, and flycatchers.  One morning was spent at the La Selva Biological Station, a world renowned research facility.  La Selva was the first private ecological conservation area in Costa Rica.  The trails at La Selva meander through origin old growth rainforest where we encountered a variety of exotic, colorful birds, including trogons, motmots, and woodpeckers. 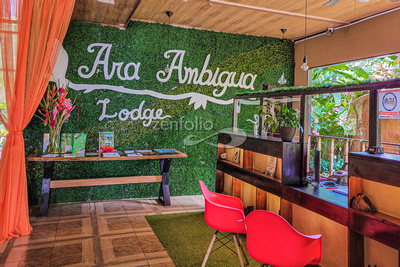 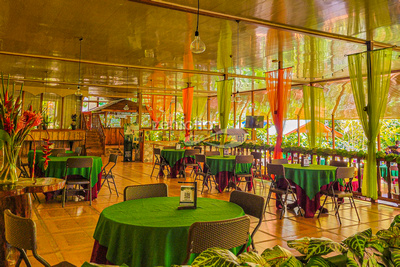 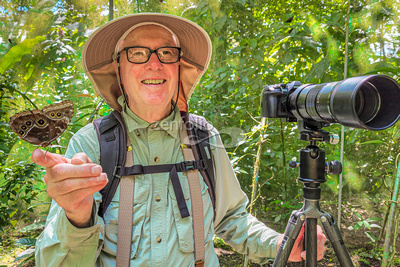 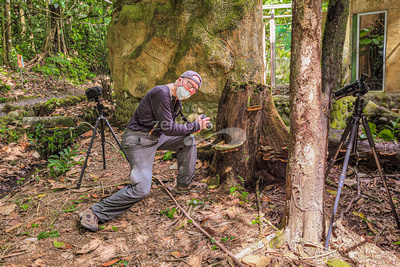 Our final stop on this truly amazing Costa Rica adventure was Cope’s Garden not far from the Ara Ambigua Lodge.  Cope’s Garden was created by wildlife artist José Albert Pérez as a retreat for birders and photographers.  From the garden, we followed José into the surrounding forest where he cleared a trail for us with his machete.  The purpose of this foray was to locate spectacled owls and white bats, both of which José successfully found for us.  Photographing the white bats proved to be a challenge.  These bats are very small, white fluffy mammals about the size of a ping pong ball.  They are nocturnal and roost during the day under large plant leaves that are folded into a “tent” shape.  I had to lay supine on my back while Minor illuminated the bats with a flashlight in order to photograph them.  I would dare say that was the highlight of the trip. 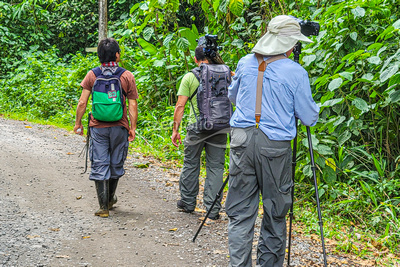 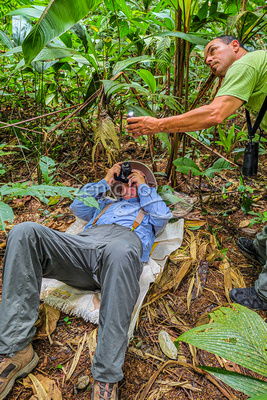 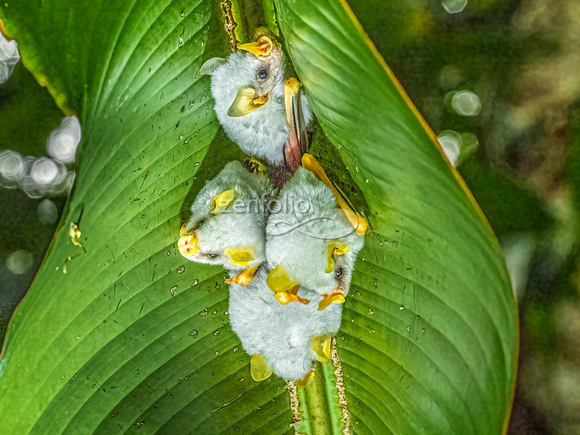 To see more of the pictures from this trip to to the "Costa Rica 2022" Gallery on the home page of the web site.