Yes, finally Jane and I broke with the Covid-19 travel restrictions and ventured out for our first road trip of 2021.    We hadn’t prepared for a road trip in such a long time that packing for this trip took a bit longer than usual and required the use of an old packing list so we wouldn't forget anything. We headed south from Albuquerque to southern Arizona early on a Sunday morning in late March and it felt good to be on the road again for more than a few hours.  Our destination was The Pond At Elephant Head, a bird photography retreat owned and run by Daniel Grayson.  The Pond is situated about 30 minutes south of Green Valley, Arizona, where we met up with our San Diego friends Dali and Neil Solomon.

Early Monday morning the four of us met Daniel (who prefers Dano) and were shown around The Pond.  The pond is actually a small, shallow depression dug into the earth filled with water that attracts birds in the arid southern Arizona desert. In addition, around the circumference of the pond, Dano has placed numerous feeding stations and perches, mimicking the natural habitat of the Sonoran desert.    So this small desert watering hole, with its food and shelter, has been transformed into an oasis for birds.  Photography is accomplished from comfortable, although well used, blinds.

One memorable photographic highlight was an encounter with a Cooper’s hawk.  This raptor preys on birds and was well aware that birds congregated at the pond.  According to Dano, this Cooper’s hawk makes routine visits to the pond.  We noticed that whenever this predator made an appearance, all the birds immediately disappeared into the undergrowth and a silent hush settled over the pond.  This happened several times while we were in the blind but we never actually saw the hawk.   One time, when all the birds vanished from view, in my periphery I observed some movement.  It was the Cooper’s hawk sitting on a stout branch in the brush next to the blind.  Apparently the hawk was so intent on looking for prey that it was unaware of me moving my camera around to grab a few shots of it.

During my research about The Pond I had seen some really amazing roadrunner images that were taken there.  I asked Dano about the roadrunner and he very positively assured us that he could entice the bird with some wormy morsels to come within camera range.  I did not know, but roadrunners are monogamous, so when Dano called the roadrunner in, there were actually two of them, a mated pair.  We got some very nice frame-filling shots of the quick birds as they ran in for their worms.  Dano even got one of them to fly, and that it very unusual for a roadrunner.  By placing a worm high on a perch, the bird had to fly up to fetch it. 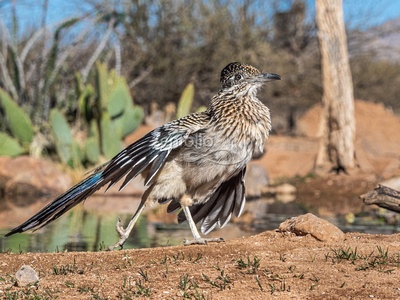 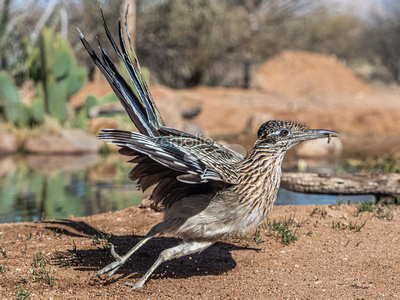 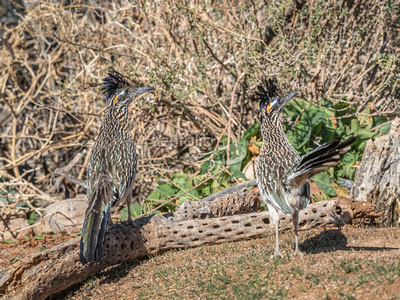 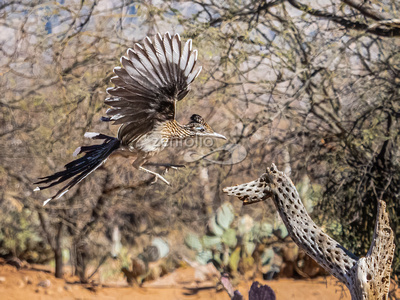 The four of us departed The Pond late afternoon to caravan two and a half hours east to our next destination, the Battiste Bed, Breakfast and Birds, a B&B in Hereford, Arizona.  The B&B is hosted by Tony and Julie Battiste and is located in the lower Miller Canyon area of the Huachuca Mountains, famous for its spring and fall bird migrations.  Tony is an avid birder and an accomplished photographer and, like The Pond, has created a bird friendly environment in his garden with a water feature, plenty of feeders and perches.  For photographers, he built a blind from where migrating birds could be easily photographed.

At Tony’s, I tried capturing birds in flight with a special setting on my Olympus camera.  When my efforts proved futile I mentioned it to Neil.  After checking the camera manual and going through the camera’s special menus, we concluded that I did not have the camera’s latest firmware.  I aborted using the camera’s special setting, reverted back to using a fast motor drive, shooting in anticipation of the bird taking off or landing, and hoping for some reasonable results.  Upon returning home, downloading updated firmware became a high priority. 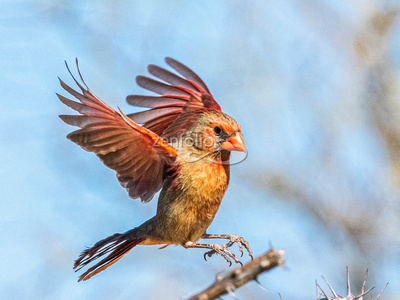 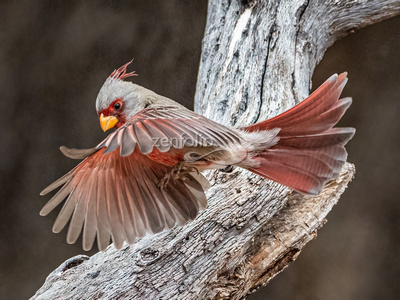 After four nights at Tony’s B&B, we four intrepid travelers backtracked to the Santa Rita Lodge in Madera Canyon just southeast of Green Valley.  There we spent two more days photographing birds.  In theory, at the lodge, being situated at a higher altitude in Madera Canyon, there should have been a different variety of migrating birds.  We noticed, however, that the birds were pretty much the same and that, in general, the spring migration was not as plentiful as normal.  The variety of species and numbers of birds were far less than we have experienced at other times photographing in southeastern Arizona.  To make up for the lack of bird species, a coati came foraging through the cabin area where we were staying and moved just slowly enough for me to get a snapshot. 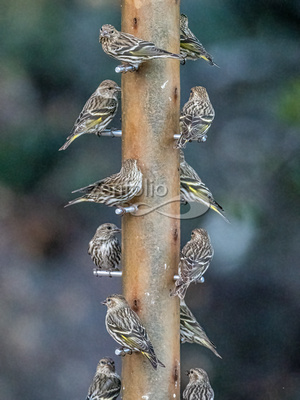 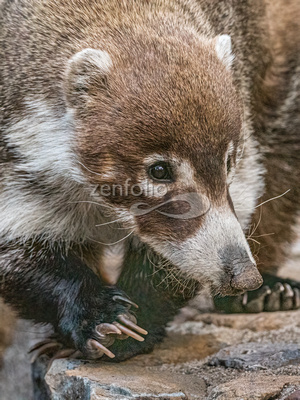 Rather than staying in Madera Canyon photographing the same birds, Jane and I decided to drive to Tucson, about an hour north, to do some exploring there.  Neil had told us about Reid Park in Tucson where vermillion flycatchers were frequently seen and photographed.  We were told to look for flycatchers by the parking areas near the dog walk.  Of course we had no idea where that was.  The park is very large and includes the Tucson zoo.  We asked for directions to the dog walk at the zoo entrance and eventually found the dog walk area.  We sat in the car looking out the windshield a bit befuddled not knowing where exactly to start looking.  Then, there it was right in front of us, a bright red vermillion flycatcher foraging in the grass.  In addition to the flycatcher, I also happened upon a very small, pretty verdin darting around in an acacia tree.  The trip to Tucson turned out to be more rewarding than staying in Madera Canyon. 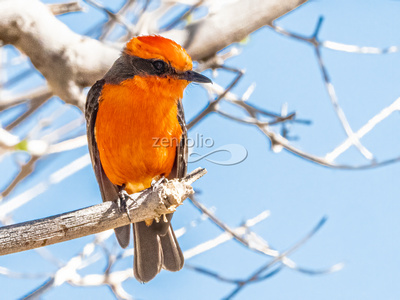 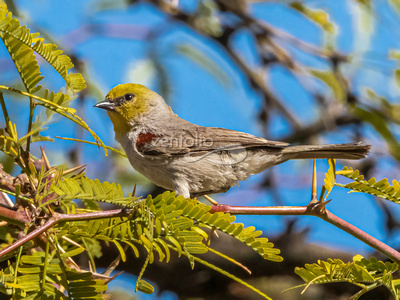 On the way home we made one more stop.  I had read that late March was the time for wildflowers in the Organ Mountains and Las Cruces was the logical place to stay. We spent a day looking for wildflowers.  Unfortunately, there had been no late winter rain to germinate the seeds.  We did see a few scattered Mexican poppies along the shoulder of Aguirre Springs Road but not the blanket of color in the foothills that could be expected in a normal water year.  After a couple of nights in Las Cruces we turned north on I-25 for home and so ended our first road trip of 2021 with lots of bird pictures but not wildflowers.