THE YEAR THAT WASN'T

The shortest day of the year is quickly approaching end temperatures along the Rio Grande rift valley have turned chilly.  The holidays will shortly be upon us.  Yes, 2020, the year that wasn’t, will soon be over.  Jane and I have come to grips with the travel constraints imposed on us by the pandemic.  Optimistically, we have re-booked our cancelled 2020 trips and have fingers crossed that we can travel to our chosen locations in 2021.  In the meantime, we have also started to prepare for the holidays.  We have assembled our artificial Balsam Hill Christmas tree and decorated it with many of the ornaments we have collected from our travels.  Jane has also decorated the house with all kinds of joyful yuletide displays.  Santa’s mail order gifts have started to arrive and are being colorfully displayed under the branches of the Christmas tree.

During New Mexico’s avoid-crowds-advisory, we have been day-tripping by ourselves to explore more of New Mexico’s diverse scenery.  We felt safe from potential Covid-19 infection with just the two of us confined in our own car.  Our destinations were to remote areas where we encountered only a couple of other people and were able to stay yards, not merely feet, away. With the help of several guide books, we scouted out several potential photo locations.  Early winter, with brown and dormant desert vegetation, is not the most scenic time for landscape photography, however.  My plan was to accumulate a list of places to return to in spring when new growth should make the desert appear green again. 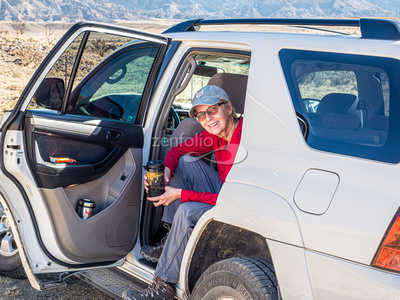 One location Jane and I scouted was the Ojito Wilderness area about an hour and half from home.  There are two established trails in this wilderness set-aside and we explored both.  Both trails were about two miles round trip with modest elevation gains.  The first trail led to some ancient petroglyphs situated on the edge of a mesa with a magnificent view of the surrounding terrain, eroded with deep washes and arroyos.  The other trail terminated at an area of colorful sandstone hoodoos.  The scenery and photo opportunities were compelling, so we went back for some photography a few weeks later.  Images from these trails can be found in the Ojito Wilderness Area gallery. 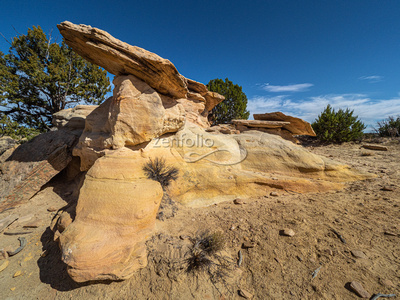 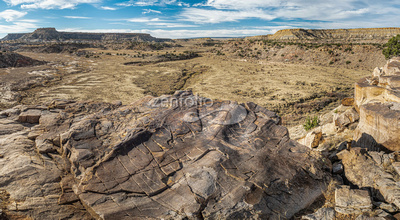 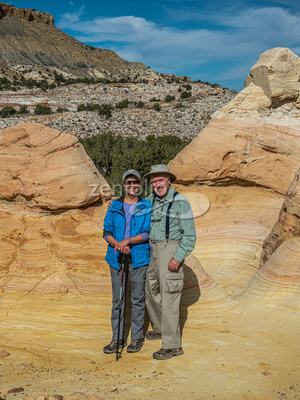 The next area we explored was San Lorenzo Canyon, also about an hour and half from home but to the south.  The San Lorenzo Canyon hike was mostly in a wide, sandy wash with high, sloping escarpments on either side.  The guide book advised that this trail was about 4 miles round trip, but we encountered a substantial rock fall about half way that we did not attempt to scramble over.  There were some interesting rock formations along the section of the trail that we did hike and San Lorenzo Canyon is on my list to return to in the spring.

Cabezon Peak is a large, steep sided neck of volcanic rock, rising nearly 8,000 feet above sea level, and a well know landmark in northwest New Mexico.  This giant volcanic plug is visible for miles in all directions as it towers over the low lying Rio Puerco valley.  This was an obvious landscape feature for me to investigate and explore.  During my internet research, I discovered that there were also ancient pueblo ruins and petroglyphs in this area.  So, travel to Cabezon Peak became another day-trip away from urban crowds.  This trip was a bit longer, about two hours northwest of home, with an extensive stretch of dirt track.  Cabezon Peak was impressive but a cloudless sky and scarce winter foliage did not make for good picture taking.  This landscape was also added to my spring location list.

Jane and I next ventured a bit further on this dirt track to the Guadalupe Ruins.  These ruins, constructed about eleven hundred years ago, are the easternmost outlier of the Chacoan culture that flourished in the southwest at that time.  The Guadalupe Ruins are situated on the edge of an isolated mesa about 200 feet above the valley floor.  The only access is along a short, but very steep, trail that we traversed with some difficulty.  The top of the mesa offered an amazing view of the Rio Puerco valley with its myriad gullies, ravines and volcanic plugs penetrating the horizon.   Since there were no clouds to add drama to the scene, I will have to return to this site and again climb to the top of the mesa in order to capture more compelling images. 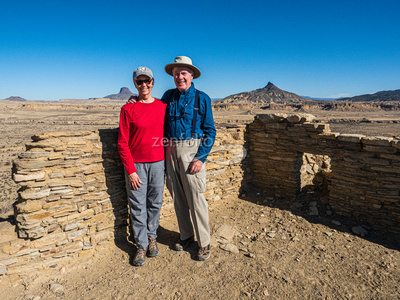 After taking a refreshment break and resting our legs from the steep descent, we attempted to locate the petroglyphs in Tapia Canyon a short stint further down the dirt road.  I had found longitude and latitude coordinates for the trail head during my research into this remote area of New Mexico.  The trail to the petroglyphs, although not strenuous, was a long two miles in.  After about a mile in, however, our legs started to complain and realizing how far we still had to go, and return, we aborted our attempt to reach the petroglyphs.  So, Tapia Canyon is definitely a location to return to next spring.

Bosque del Apache is a world famous New Mexico wildlife refuge that Jane and I had visited a number of times while living in San Diego.  Now this popular refuge, with its innumerable sandhill cranes, snow geese and other water fowl, is only a two hour drive south from home.  To continue our avoidance of crowds, in early December we decided on a day trip to re-visit Bosque.  Based on our previous excursions, we had high expectation about the wildlife photography opportunities.  Unfortunately, our optimistic outlook was not realized.  Whether a result of drought or refuge management, many familiar roosting ponds along the access road were dry.  Consequently the dramatic mass of snow geese ascending from these ponds that photographers yearn for did not occur.  The only mass ascension I was able to capture was one of red winged black birds, not snow geese.  Photo opportunities along the loop road were significantly less than on our previous visits to Bosque.  We toured Bosque for several hours and did manage to get a “keeper” or two before returning home.  These new shots can be found in the Bosque del Apache sub-gallery in the Wildlife Refuges main gallery. 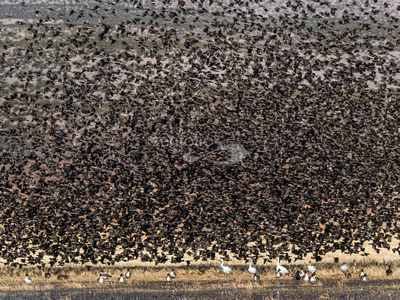 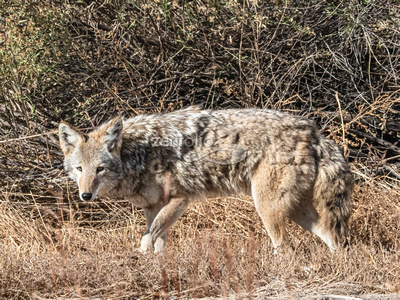 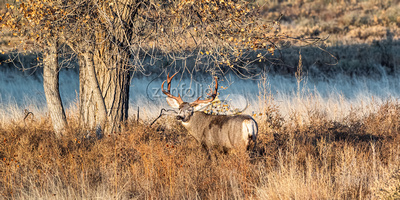 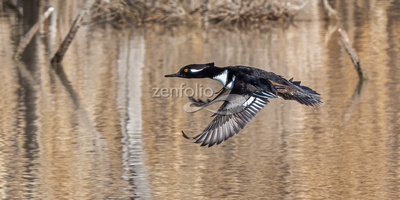 Although all our foreign travel was aborted in this coronavirus dominated year, Jane and I have managed to safely get out of the house.  Our recent local explorations have resulted in a list of photo sites to visit next spring.  We are optimistic about travel in 2021 and in the meantime we will be celebrating this year’s holidays with chilled bubbly from California.