Long before this year, dominated by the coronavirus, began, Jane and I had planned and organized an incredible travel schedule for 2020.  Of course, none of those journeys materialized as we sheltered at home, wore masks and practiced safe distancing.  When we realized that our most anticipated trip to Europe was off the table, we anxiously explored other potential options.  We eventually settled on and patched together a long road trip to our timeshare cabin in West Glacier, Montana.

The cabin is a long 1,275 miles from home and we broke the twenty hour drive into shorter segments with stops in Moab and Brigham City, Utah.  The layover in Brigham City was planned to allow a visit with my 93 year old sister, Neli.  Traditionally, Jane and I have stopped to visit with Neli and her husband, Fred, on our way to or from the cabin.  Since we had not been to the cabin for many years it was a welcomed pleasure to visit with them again. We were both amazed on how sharp and witty both Neli and Fred were at their advanced age.

We arrived at the cabin only to find Glacier National Park and surroundings shrouded in smoke from the inferno of fires in Washington and Oregon.  We found ourselves for several days again “sheltering at home”.  The cabin is situated in the "satellite shadow" of some high mountains with very spotty internet access, so during those smoky days our time was spent reading and relaxing.  I had brought some bird feed that I spread along the wooden railing of the front porch and entertained myself with photographing small critters and birds that came in for the easy pickings. 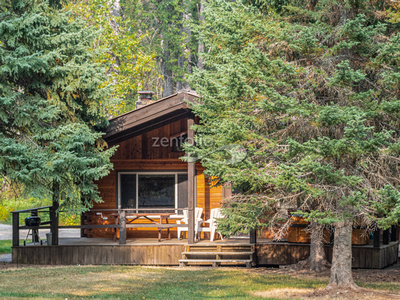 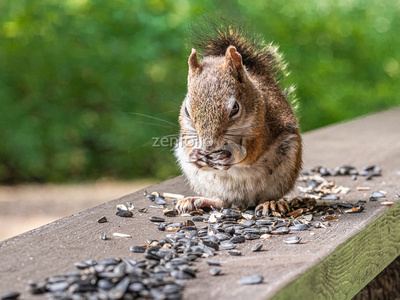 Jane came up the excellent idea to see if I could line up something with Triple D.  Triple D Game Farm, located in Kalispell, Montana, about 45 minutes from the cabin, provides “wildlife models” that keepers bring to natural settings for photography.  I was able to schedule a photo shoot and selected some small mammals to photograph, including a young wolf, bobcat, fox, badger and a couple of playful bobcat kittens.  The shoot at Triple D made up for the lack of picture taking in the park due to the smoky conditions. 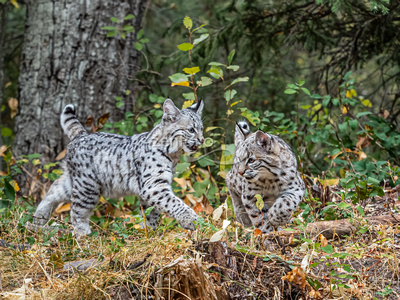 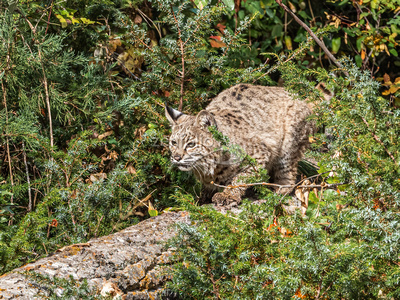 Thankfully, after several days, rains came and cleared the air.  So during the last week of our two week stay we were able to venture out and enjoy the national park.  We had not been to Glacier National Park for about four years and were amazed at the number of people in the park.  In the nearly twenty years that we had been coming to Glacier, we had never seen so many visitors.  Perhaps it was a Covid-19 phenomenon with more people wanting to get out of the house and driving to national parks.  In Glacier, the result was that by about ten o’clock in the morning all the roadside pull outs, trail head parking areas and the large parking lot at Logan Pass were full.  Typically, Jane and I had to hustle out of bed at six in order to ensure parking at the trails we planned to hike.  Barring smoke and crowds, this alternative to our European trip was a welcomed two week respite from sheltering at home in Albuquerque. 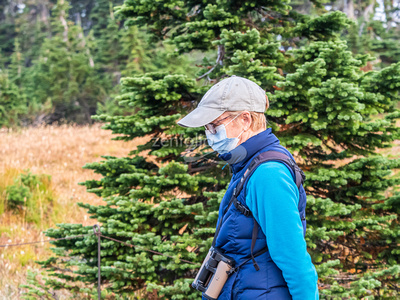 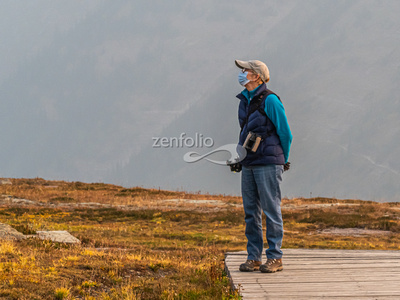 From the cabin we extended our road trip with a sojourn to the Slippery Ann Wildlife Refuge near Lewistown, Montana.  During the rut, the Slippery Ann Refuge is a popular elk viewing area along the Missouri River.  Jane and I had stopped here four years ago on a previous road trip. As in Glacier, there were many more “elk viewers” than we anticipated, but arrived early enough to obtain a parking area on the dirt track adjacent to the primary viewing area.  The elk wander out from the dense groves of cottonwood trees that line the Missouri River to graze in the meadows where they can be viewed.  In mid to late afternoon, the cows emerge first followed by the bulls who have gathered the cows into small harem herds for eventual mating.  The bull elk’s primary objective is to protect his cows from being pirated by other bulls.  As a result, skirmishes and clashes among the dominant males occur and those are what I hoped to photograph.  I was only able to capture one such joust.  It was a long distance from the car but I was able to create a descent image. 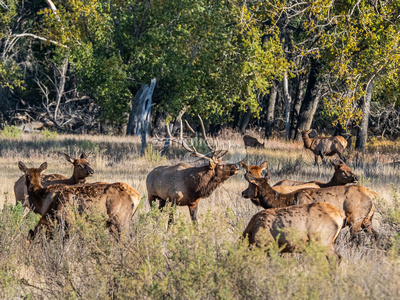 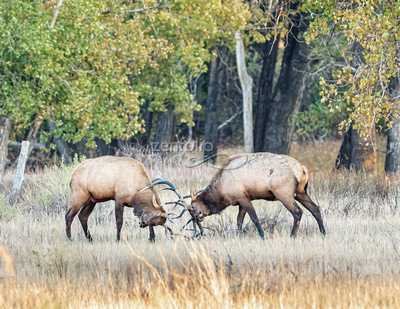 Our next road trip stop was a three night stay in Jackson, Wyoming, a place dear in our hearts.  On August 31st in 1997 Jane and I were married at Schwabacher Landing in Grand Teton National Park.  We had not been back to the park since 2007 when we returned for our tenth anniversary.  We celebrated this return by staying at the Wyoming Inn, an upscale lodge in town with an outstanding and convenient in-house restaurant.  I had some specific photo locations in mind for this stop in Grand Teton National Park, including Schwabacher Landing.  One clear night I ventured out for some night sky photography while Jane stayed warm and cozy in our very comfortable hotel room.  Although the sky was clear there was also a full moon making it the least desirable night for star photography.  The long exposure required to capture dim star light made the moon illuminated foreground look like a day time shot. 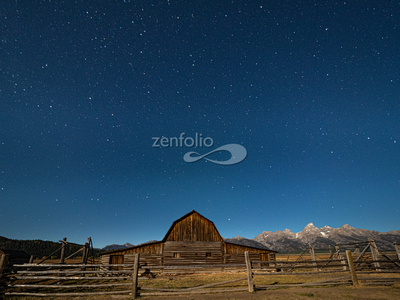 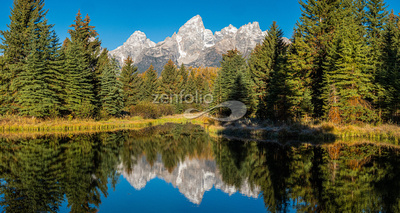 Moab, Utah, with easy access to Arches and Canyonlands National Parks was our last three night road trip stop before heading back home.  At Arches, I practiced some more night photography with similar results as those in Jackson.  Crowds were excessive in the national parks and weather did not cooperate for sunrise or sunset photography.  To escape the multitudes, Jane suggested we drive to Goblin Valley, a Utah state park about ninety minutes from Moab.  I had wanted to photograph at Goblin Valley and enthusiastically endorsed Jane’s suggestion and we added this location filled with sandstone hoodoos to our road trip. 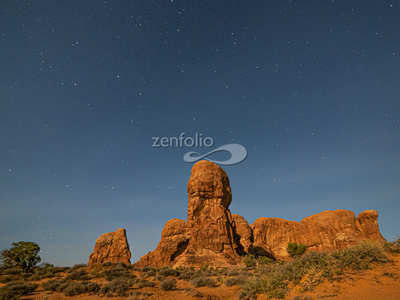 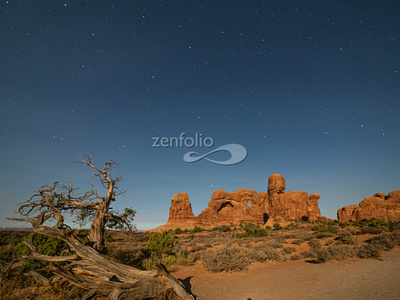 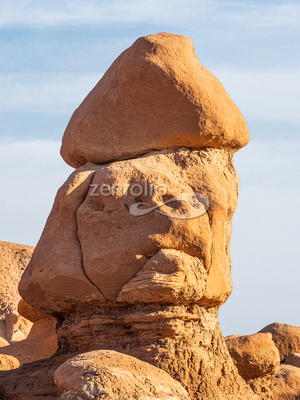 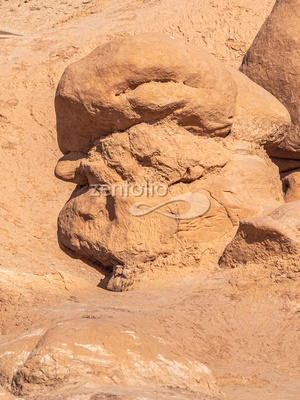 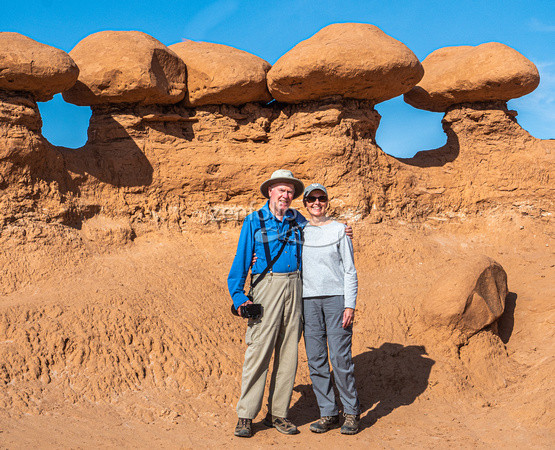 Discussions on the drive home were highlighted with the possibility of returning to Moab to enjoy the parks when less crowded.  About a six and half hour from Albuquerque, returning to Moab would not be a huge undertaking.  We will see.

Images from this road trip are located in the following galleries: