In 1998, some seventeen years ago, Jane and I rented a four-wheel drive Blazer in San Diego and spent two weeks touring the backroads of southern Utah.  That vacation included travel through the Grand Staircase - Escalante National Monument, created less than two years prior to our trip.  Recalling the adventure and the amazing scenery of that first journey, I had wanted to revisit and photograph the landscapes and arches of the Grand Staircase - Escalante National Monument.  And, that is exactly what I did in April, 2015.

The original plan was that Jane would join me on this excursion.  Then, while I was deep into planning the routes and photo locations, Jane had a change of heart and decided she would prefer to stay home.  Bruce Hollingsworth, who frequently joins me on photo trips, had commitments that prevented him from coming along.  During my research I had come across Jens Munthe, the author of a book descibing many of the arches found in the Monument and that I wanted to photograph.  Since I did not think it wise to wander in the desert looking for arches by myself, Jens kindly offered to guide me to the photo sites I had selected.  In the meantime, Bruce had cleared his calendar and was able to join me after all.

The Grand Staircase - Escalante National Monument is a vast, 1.9 million acre, wilderness.  There are only a few washboard encrusted dirt roads.  For our excursion into this immense, remote area, I had selected to stay four days in the small community of Escalante and concentrate photography along the primitive Hole-In-The-Rock Road.  Accommodations were at the Circle D motel (www.escalantecircledmotel.com) a very nice, refurbished property with a very energetic and helpful host.  After exploring along the Hole-In-The-Rock Road, we moved to an even smaller community, Cannonville, to photograph along the Cottonwood Wash Road for three days and stayed at the Grand Staircase Inn (www.grandstaircaseinn.com).  Also an adequate accommodation but don't stay on the third floor if you have a lot of gear like we did.  There was no elevator but the staff was very helpful and informative. 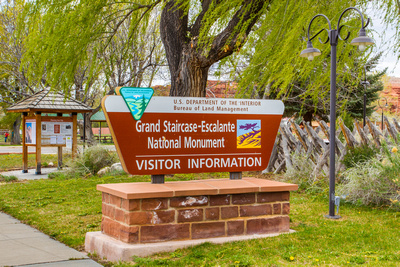 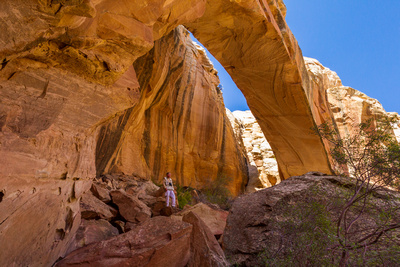 I am so grateful to Jens for all his advice and help during the planning and implementation of my trip.  Even though there were now two of us, Bruce and I concluded that we would not have found all the arches and slot canyons we photographed if it had not been for Jens.  On our very first day out, Jens led us to three very photogenic arches that had not even been on my radar.  The most fascinating site we visited, however, was the Peek-A-Boo slot canyon.  This excursion began with a moderately challenging hike along a poorly cairned trail.  Thanks to Jens, we had no trouble locating the slot entrance.  The difficulty was in actually entering the canyon which required scrambling up a steep, 15 foot, slick-rock dropoff.  After some hardy attempts, none of us could struggle our way up the dropoff, especially with camera gear, even though handholds had been carved in the slick-rock sandstone.

Fortunately, Jens knew of a back way into the canyon and that is where we ended up entering it.  Peek-A-Boo is not a very long canyon but it is a very, very narrow one.  Even turned sideways, there were spots where we had to push and scrape ourselves through the confining red, sandstone walls of the canyon.  The ultimate reward for all this strenuous effort was the ability to photograph a double arch inside the slot canyon. 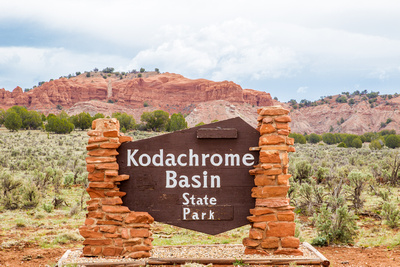 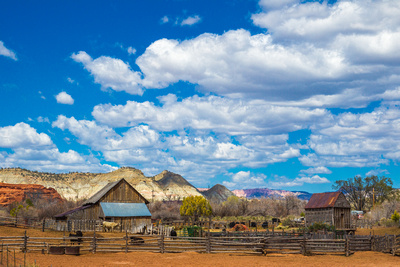 As per usual, not everything was perfect.  We had several days of very strong winds with gusts up to 45 MPH creating dust and aggravation as we hiked along sandy trails or attempted to set up for a photo shoot.  We tried as best we could to protect our camera gear from the swirling sand and dust but still had to use compressed gas in a can to blow the grit off the cameras, lenses and tripods.  We also had snow.  Not much, but enough to keep us off some of the dirt-clay tracks we had to traverse to reach our photo sites.  None-the-less, the venture into the canyons of the Grand Staircase was amazingly successful with new discoveries and amazing photo ops every day.

Images from this journey can be found in the Grand Staircase - Escalante gallery. 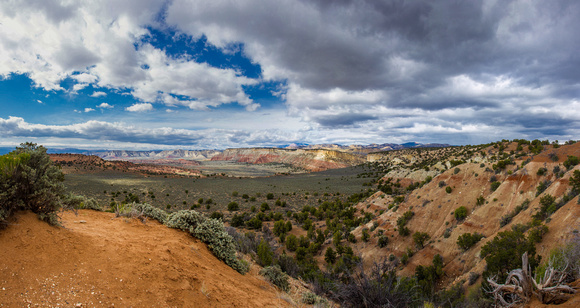