For a southern California boy, it was extremely cold during my recent trip to Homer and Fairbanks, Alaska.  Homer was my destination for photographing the iconic American Bald Eagle.  Day time temperatures were in the low to mid-teens.  I was bundled to the hilt and loaded with chemical warmers.  I had come on a 5-day photo workshop with Dale Franz (www.franzfoto.com) and four other wildlife photographers.  The objective was to photograph eagles in their winter range along the southern end of the Kenai Mountains, across Kachemak Bay from Homer.  Each morning and afternoon the six of us we would depart from the boat harbor, at the end of the Homer Spit, and motor across Kachemak Bay in the utility landing craft “XTRATUFF” piloted by Captain Kevin, to China Poot Bay for two to three hours of photography.  Our photo sessions were controlled by weather, primarily wind.  The crossing to China Poot Bay normally took about twenty, or so, minutes when conditions on the bay were good.  The ride was rough and longer when the tide and wind were against us.  Dale and Kevin always worked hard to position “XTRATUFF” in good light for photography. 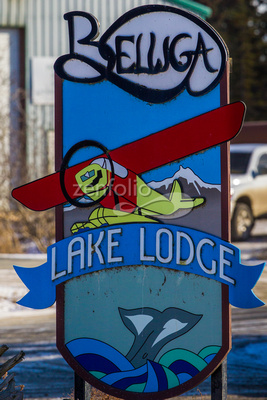 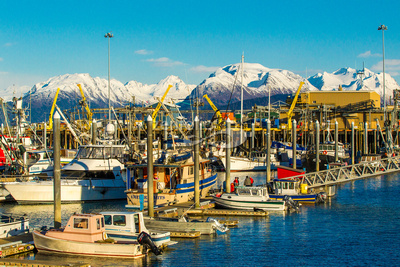 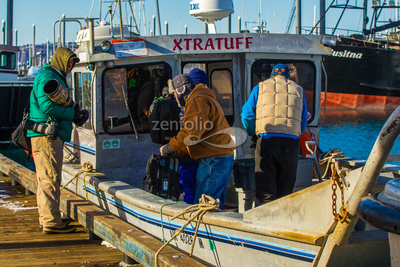 The Beluga Lake Lodge (www.belugalakelodging.com) was our home for the duration of the workshop.  We spent a lot of time in our rooms.  Typically we were up and out for breakfast by 7:00 AM, then back to the room for added layers and hand warmers for a departure from the dock around 9:00 AM, depending on whether it was sunny or cloudy.  We would return from the morning shoot around one, remove some layers before heading to lunch and then back to the rooms for downloading and napping until about three or four before heading back out for the afternoon shoot.  March is still the off-season in Homer and many establishments were closed so our lunch and dinner choices were limited but Fat Olive’s was my personal favorite for lunch. 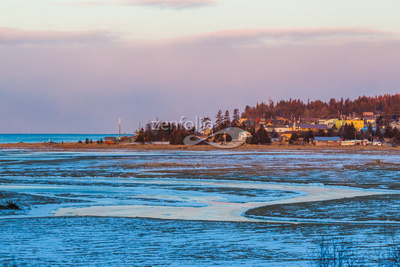 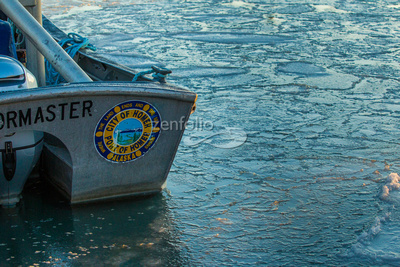 Initially we had some great sunny weather with fantastic early light and a great sunset.  Our last two sessions, however, were aborted due to heavy winds and rain.  By then temperatures were more tolerable but we could not cross the choppy and white-capped Kachemak Bay, even in the XTRATUFF.  Consequently, we spent a lot more idle time in our rooms.  By then most of us had at least ten thousand images saved on our hard drives and we spent that idle time reviewing the results of our efforts and deleting thousands of unacceptable shots.  I don’t mind confessing that I had started with over 11,000 raw images and ended up with about 2,000 after deleting out-of-focus, clipped wing, and butt shots.  You will be happy to know I whittled those down to about 35 true “keepers” that are in my gallery.

After Homer, I was off to Fairbanks for the aurora borealis.  I have long had a desire to try my hand at photographing the northern lights and, since I was already in Alaska, took advantage of the opportunity.  Fairbanks is in the auroral zone and known for good northern light displays.  There are a number of photographers that conduct aurora workshops in Fairbanks.  I had arranged with Ron Murray (www.ronmurrayphoto.com) for three nights of aurora photography.  In Fairbanks, like Homer, I also spent a lot of time in my room at the Westmark.  The drill was a bit different, however.  Here Ron and his wife Marketa would pick me up around 10:00 PM and we would head off, with the other photographers in his group, to a remote location outside Fairbanks to photograph the northern lights.  Usually, by about 11:00 PM we would set up and wait for the “show” to begin.

During our first night out there was a spectacular aurora display.  The green waves of light filled the sky, weaving, dancing and pulsating above us.  The results of the solar winds were all around us.  I was constantly changing camera positions to capture the ever changing display.  It was not easy photographing in the dark.  Although the green aurora light was bright enough to cast a light shadow onto the ground, it was still too dark to easily compose a picture through the viewfinder.  Difficult or not, I was happily taking as many shots as I could and not caring too much about composition.  The aurora display ebbed and flowed throughout the night and culminated in a magnificent finale with green and maroon lights streaking across the sky.  That night I was returned back to my hotel room at 5:30 in the morning.  What a night! 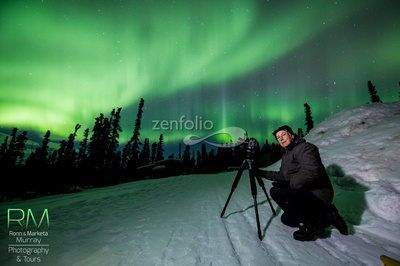 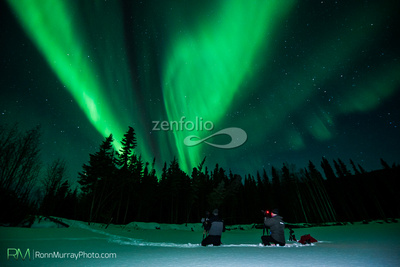 There were many more aurora displays over the next two nights, but none could compare with the first night.  I concentrated more on composition on the following nights and even attempted some star circle exposures.  Those were also difficult due to wind, which caused the pine trees to sway back and forth and be fuzzy in the final stacked image.  Because the green aurora light was relatively bright, the stars are dim and do not stand out sharply against the sky.  It was fun trying and that’s what it is all about. 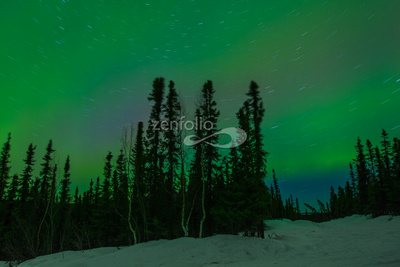