One of Yogi Berra's famous quotes is, “It’s déjà vu all over again”.  In 2008, Jane and I had traveled to Page, Arizona, and now thirteen years later we were back, " all over again".  This was our third road trip of 2021 and I had developed an adventurous itinerary for this return to Page, including tent camping, hiking and a scenic flight.

The adventure began with our drive to Page through the Navajo Nation.  At more than 27,400 square miles, it is the largest reservation in the U.S. and bigger than ten states. We stopped at Window Rock, the capitol city of the Navajo Nation, and made a short visit to the Window Rock Tribal Park and Veteran’s Memorial.  We then followed Highway 264, the Navajo Code Talkers Highway, past the Hubbell Trading Post where Jane and I had stopped in 2008.  It is now a National Historic Site and, unfortunately, we found it closed due to covid restrictions.  Highway 264 changed to the Hopi Code Talkers Highway as we entered the Hopi reservation.  The Hopi reservation is totally surrounded by the Navajo reservation and only about a tenth its size.  In 2008 we had toured Second Mesa, the center of Hopi culture, with a Hopi guide.  This time we merely reminisced as we drove through the reservation. 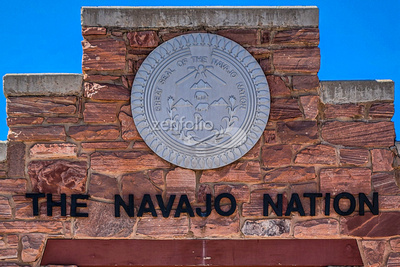 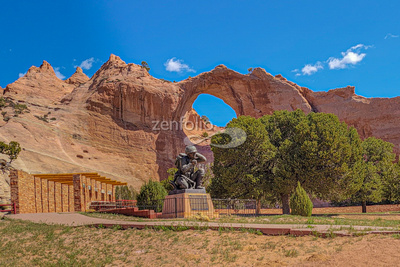 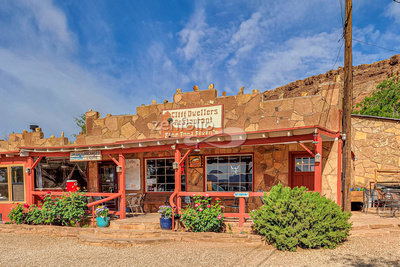 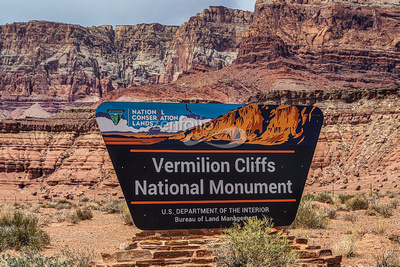 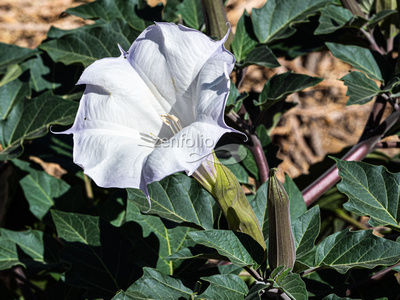 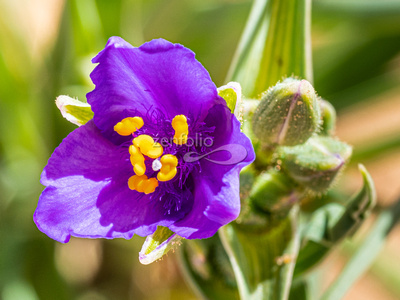 The photo tour was sponsored by Arizona Highways PhotoScapes and the camp outfitter was Kanab, Utah, based Dreamland Safari Tours.  They set up our camp, provided tents, sleeping bags, mats and meals.  It had been literally decades since either of us had slept on the ground in a tent.  In anticipation of this adventure, camping out under the stars far from civilization was expected to be an incredibly exciting experience.  In real time, however, we found it to be a struggle squirming into sleeping bags in the confinement of a small tent.  Mother Nature also dealt us a nasty blow by offering night time temperatures well below normal.  We were pretty uncomfortable that first night.  The second night was much better because Dreamland had communicated with their office in Kanab to dispatch extra blankets to the camp.  All in all, however, camp life was enjoyable and we had seven other good-natured photographers to share the ambiance of camp life. 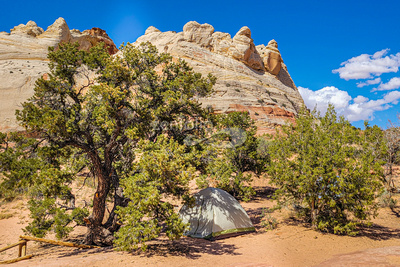 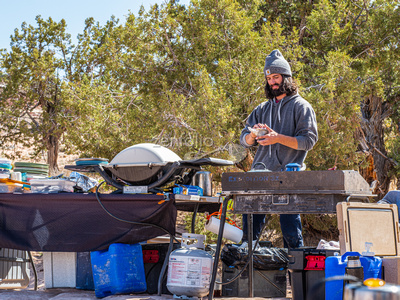 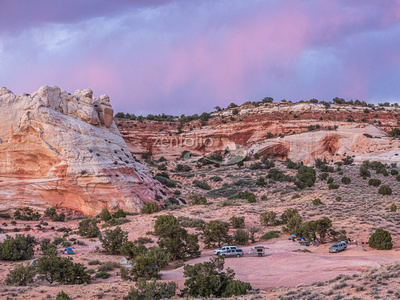 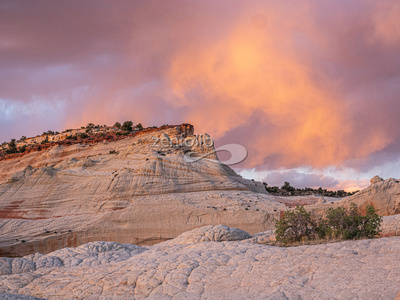 White Pocket is an intriguing photographic destination of multicolored Navajo sandstone formations.  A grayish white sandstone layer covers red sandstone creating cross-bedded, twisted, swirling, multicolored formations creating a fantasy landscape. The whole colorful outcropping is only a couple of miles long and the sandstone provides a gritty surface for boots to cling to making traction easy on the undulating terrain.  Camping out provided the opportunity to photograph the fascinating White Pocket formation at sunrise and sunset.  As a bonus, I was also able to practice some night sky photography, with mixed results however.

Images of White Pocket are located in the National Parks and Monuments Gallery under Vermilion Cliffs National Monument. 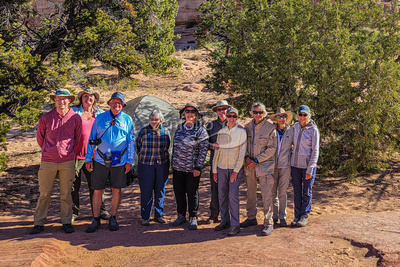 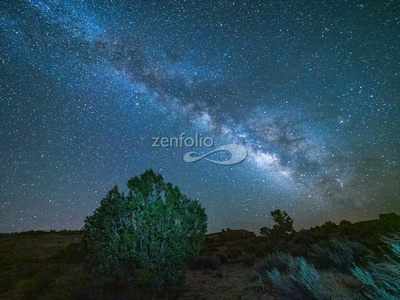 The photo tour ended at the Cliff Dwellers Lodge where it has started.  After gathering our gear and bidding adieu to our fellow photographers, Jane and I headed to Page for a good long shower and a much needed nap.  I had scheduled three nights in Page and Jane had made reservations for a king room at the Hyatt Place hotel, a smart, modern, new facility.  We thoroughly enjoyed the space of a king room after two nights in a small tent.  The next morning was a sleep-in and the day was set aside for some shopping in Page.  The pandemic, however, had caused many shops to close or go out of business.  We did manage to do some browsing and found the same Mexican restaurant, Fiesta Mexicana, where we had dined thirteen years ago. 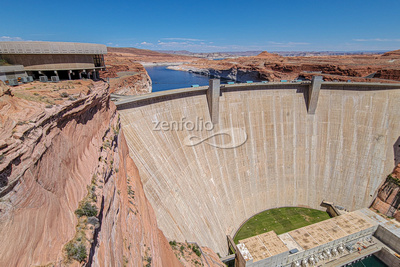 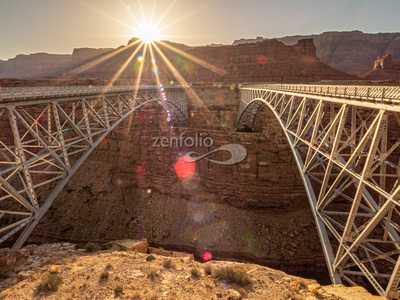 That evening, around sunset, I had scheduled a scenic flight over Lake Powell with American Aviation Air Tours in Page.  A scenic flight was something we had not done on our previous trip to Page and something new to look forward to.  It was an old, well worn, Cessna that transported us upward and around Lake Powell.  Covid protocol imposed by American Aviation prevented Jane from occupying the co-pilot seat and required both of us to sit in the narrow back seats.  That meant that I could not move back and forth between windows in order to have the sun at my back for proper photographic lighting.  For this flight, however, photography was a secondary consideration and enjoying a scenic flight over an extremely scenic lake was the prime objective.

Images from the scenic flight can be found in the National Parks and Monuments Gallery under Glen Canyon National Recreation Area. 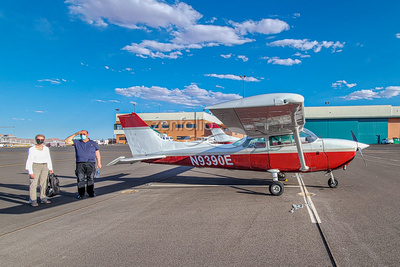 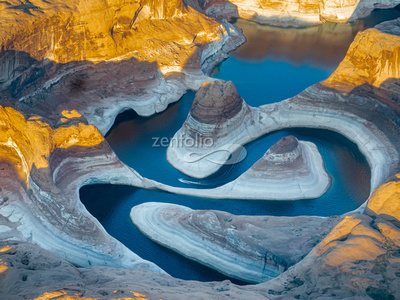 My diverse itinerary had us up early the next morning for a hike into Buckskin Gulch, reportedly the longest and deepest slot canyon on the Colorado Plateau.  I had arranged for a guide with Seeking Treasure Adventures, out of Kanab, to lead us to the slot canyon.  There are two primary trails to Buckskin Gulch, the Middle Route and the Wire Pass trail that was described as the moderate approach.  We met our guide, Hunter Bell, at Big Water, Utah, and he drove us to the trail head.  I had assured Jane that the Wire Pass trail would be easy and that we could always turn back when we had reached our hiking limit.  What I failed to understand was that the two trail heads do not start at the same location and that Hunter, not realizing that we had opted for the easy route, had taken us to the Middle Route trail head. 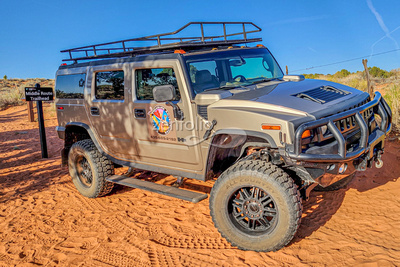 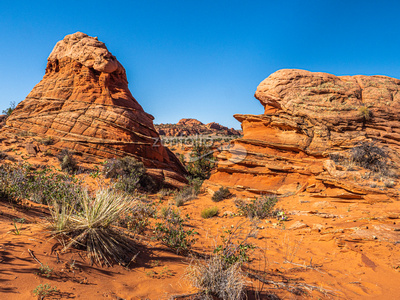 After some discussion about the difficulty of the Middle Route, Hunter assured us that we were in good enough condition to take on this more challenging approach.  Of course how Hunter could tell we were in good enough shape, I don’t know.  In the end, we trusted his instinct as a guide and proceeded toward Buckskin Gulch.  In actuality there is no defined “trail” and Hunter guided us across open desert terrain.  The Utah tourist office web site describes the middle route as “a short, no-nonsense approach to the lower reaches of Buckskin Gulch – a cross-country and wash route - good route finding ability required - very strenuous - Class 3 and Class 4 down-climbing to enter Buckskin Gulch”.

After about an hour and half of hiking cross country we reached Buckskin Gulch.  The slot canyon appeared right in front of us one hundred feet below.  This is where all of Hunter’s encouragement, enthusiasm and guiding skill was needed to get the two of us down that last, extremely steep, one hundred feet.  He helped us find hand and foot holds carved into the sandstone centuries before by indigenous people that had used this exit from the slot canyon as an ancient trade route.  I don’t know how we managed, but with adrenaline flowing Jane and I both made it to the bottom and into Buckskin Gulch.  After spending some time exploring and photographing the slot canyon we returned to the dreaded one hundred foot cliff to start our ascent back up.  Our hearts were still beating by the time we returned to Hyatt Place.  We were full of excitement about what we had accomplished and surprised that we had the stamina and courage to do it.  Hunter had been correct that we were in good enough shape.

Images from this adventure can be found in the Buckskin Gulch Gallery. 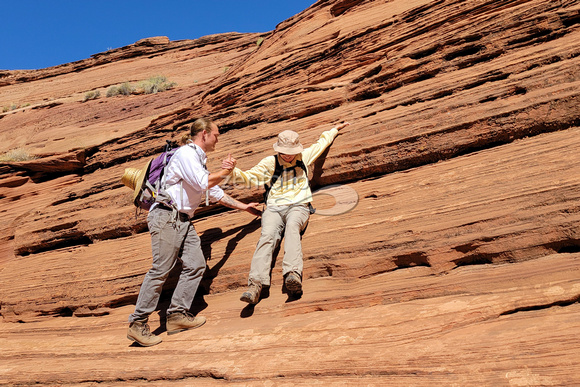 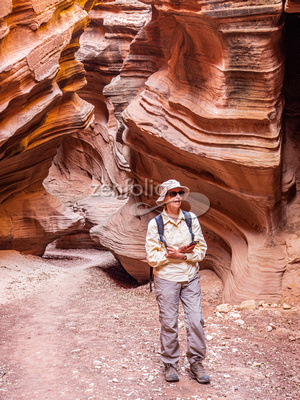 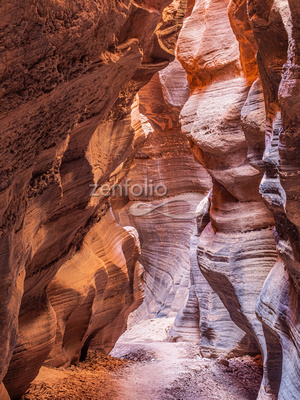 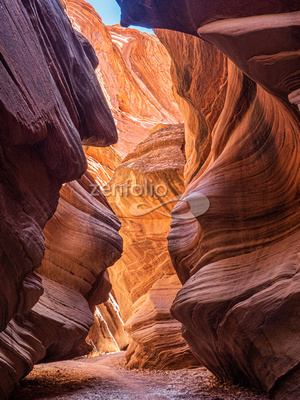 Fortunately my itinerary called for a late start the next day and we savored relaxing as we packed our bags.  Early that afternoon, the plan was to meet guides from Action Photo Tours at Big Water for an overnight trip to Alstrom Point on the north shore of Lake Powell.  In 2008 Jane and I had driven the 4Runner to Alstrom Point but only stayed a few hours.  We did not want to traverse the four-wheel drive track to return to Page in the dark.  This photo tour would allow us to be at this popular scenic location overlooking Lake Powell at both sunset and sunrise.  The downside was another night in a small tent.  We were rewarded, however, with the classic panoramic view of Gunsight Butte and Navajo Mountain at sunset.  I also got some good tips from the guides about night sky photography.  All I have to do now is learn Photoshop, not an easy task.

Images from Alstrom Point can be found in the National Parks and Monuments Gallery under Glen Canyon National Recreation Area. 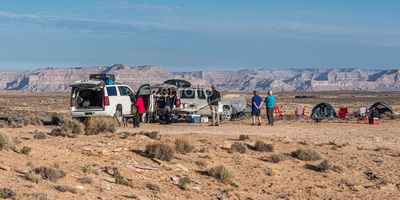 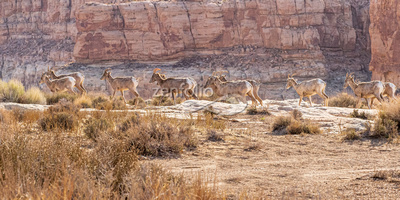 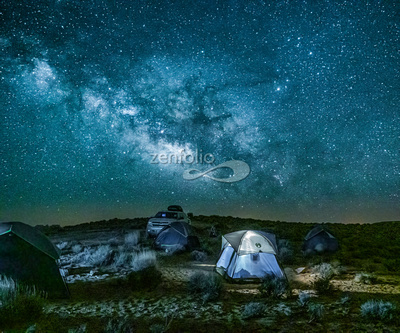 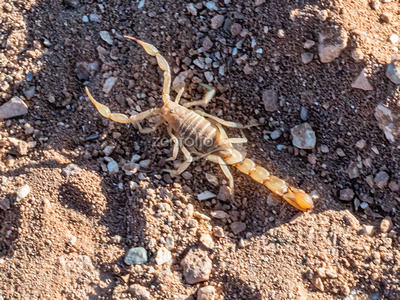 The Alstrom Point photo tour returned us to Big Water mid-morning the next day. From Big Water we drove back to Hyatt Place to retrieved our stored bags, had lunch at our now favorite Mexican restaurant, and started our way back home.  On the way home, just before reaching Farmington, New Mexico, we achieved yet one more significant travel milestone.  To be correct it was the always faithful and dependable Toyota 4Runner that achieved this milestone as it clocked 225,000 miles on the odometer.  Since 2004 the 4Runner has been our companion on many memorable adventures. 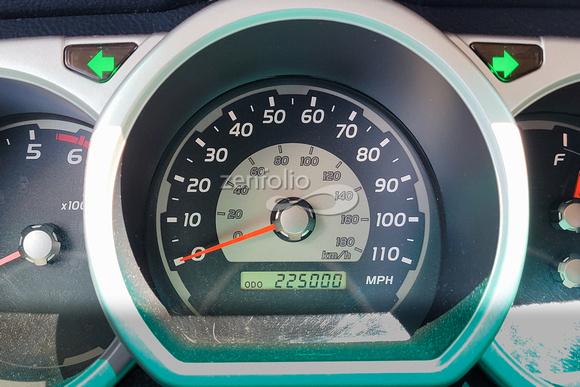