After enjoying a very scenic trip to Colorado’s San Juan Mountains in September, Jane and I spent only a couple of weeks at home before venturing out again.  This time, however, we took separate journeys.  Jane entertained her New York City girlfriend, Gigi, for about a week, including a short trip to Santa Fe, while I entertained my photo buddy, Bruce.  Bruce arrived in Albuquerque after Jane and Gigi had departed for Santa Fe and he and I left on our whirlwind photo tour before they returned.

I had developed a multi-stop itinerary for our photo trip that included some of northwestern New Mexico’s photogenic locations.  Our first objective was Valles Caldera National Preserve in the pine covered Jemez Mountains.  We arrived shortly after the Preserve’s 8:00 AM opening with the intent of photographing the colony of Gunnison's prairie dogs that reside there.  Checking in with the ranger we discovered that temperatures at the higher elevations of the Jemez Mountains had been unseasonably cold and that the little critters had started their hibernation early.  As a consolation, we did manage to photograph some distant coyotes and I managed to step into a camouflaged prairie dog burrow and ended up on my face in the prairie grass. 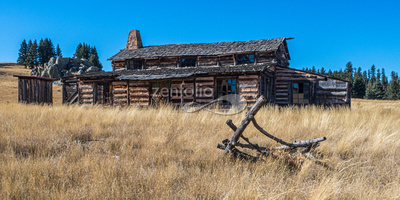 After swallowing my pride for having stumbled so badly, we ventured forth to the Chaco Culture Historical Park where we photographed the ancient ruins of Pueblo Bonito and its iconic series of doorways.  From there we traveled to the Ah-shi-sle-pah Wilderness Study Area.  This is a remote area of New Mexico badlands that invokes a fairyland feel with its numerous eroded hoodoos and mudstone spires.  We arrived at Ah-shi-sle-pah by late afternoon and photographed there till near sunset. 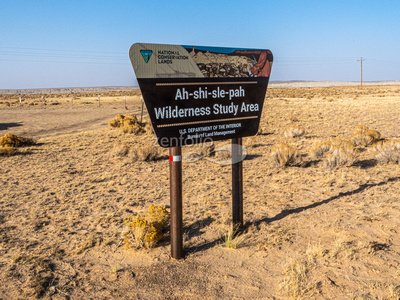 Farmington, New Mexico, became our home base for various day trips over next few days.  However, the late October weather that had turned bitter cold was not kind to us.  The itinerary called for a very early departure the following morning to photograph the eroded volcanic remnant of Shiprock at sunrise.  When we peered out the window at 4:00 AM it was snowing and that cancelled our plan for a sunrise photo shoot.  It did, however, allow us snuggle back into bed for some more shuteye.  Eventually the day warmed up a bit and the sun broke through the clouds and we ventured out to photograph the Chaco outlier ruins at Aztec National Monument with its restored kiva. 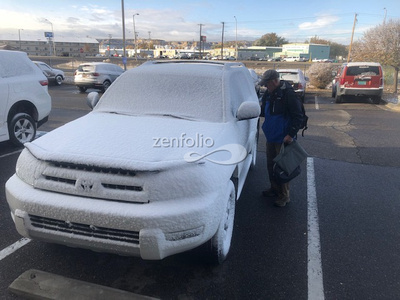 Then, after lunch at the appropriately named Aztec Restaurant, we decided to locate some Navajo rock art that dated from the 16th and 17th centuries.  I had found out about the petroglyph during my on-line research for this trip.  We were a bit concerned about driving the dirt roads after the snowfall.  However, by afternoon when we turned off the pavement the snow had all but disappeared and the dirt track was just moist enough to keep the dust down.  The Navajo petroglyph panels were particularly well executed and distinct.  As with most rock art Bruce and I have photographed, there was evidence of damaging graffiti scratched into the sandstone around the Navajo art work. 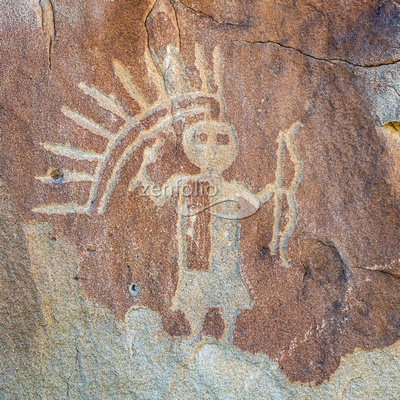 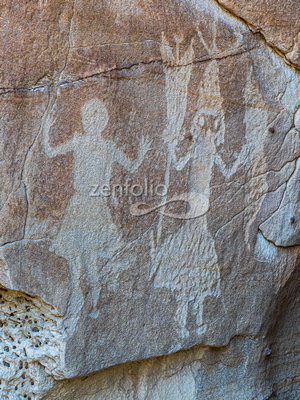 For the next day I had arranged for a guided tour of natural arches around the area with Larry Beck, the current vice president and former president of The Natural Arch and Bridge Society.  Larry is far and away the local expert on arches and their locations.  He guided us to many of his favorite arches in the Aztec area and we finished our journey with him at sunset photographing Arch Rock.  Bruce and I agreed that without Larry guiding us we would never have found many of the beautiful arches we photographed. 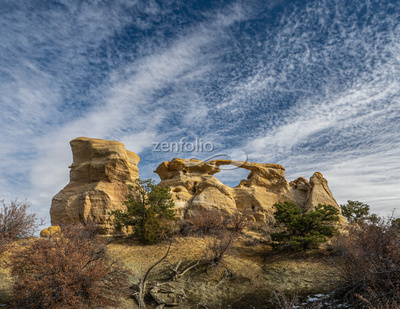 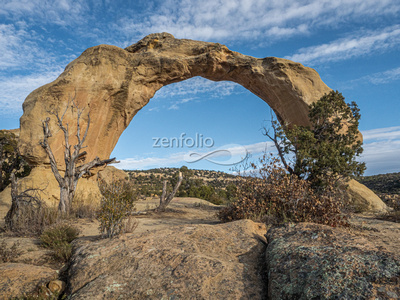 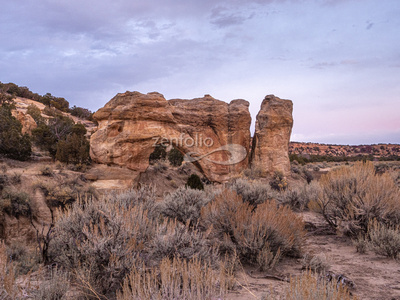 My alarm was set for an early start the next day.  Our target was the De-Na-Zin wilderness section of the Bisti badlands.  This was another remote and desolate area an hour’s drive south of Farmington.  The objective was to take advantage of early morning light on the eroded formations.  From my research we selected two areas of badlands to photograph, the “egg nursery” and “hoodoo city” for which we had GPS coordinates.  Needless to say, when traversing heavily eroded arroyos and steep sided washes, following a GPS direction can lead to much backtracking.  We explored the De-Na-Zin wilderness for nearly five hours and, according to GPS, hiked around the weird and bizarre formations for about six miles.  We started this trek bundled with multiple layers and a temperature of 20 º F and we returned to the 4Runner five hours later, just as bundled, when the temperature had reached all of 30 º F. 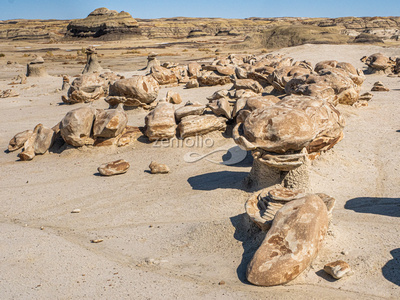 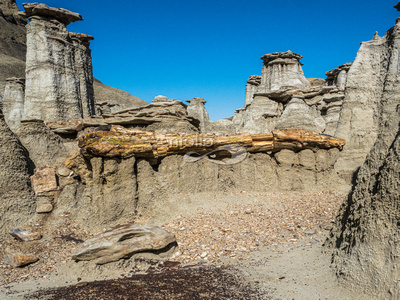 Our next objective was the Monument Valley Navajo Tribal Park where we had arranged for several Navajo guided tours into the private areas of the park.  On the way to Monument Valley, however, we stopped first at Canyon de Chelley National Monument.  We arranged for a Navajo guide to take us into the canyon.  Because Navajo people still live in the canyon, access can only be obtained with a local guide.  One of the popular photo locations is Spider Rock, an enormous eight hundred foot tall sandstone spire, at the very head of the canyon and that was where we headed.  In addition to being an iconic geologic feature Spider Rock is also a cultural attribute.  Mythical Spider Woman lives on spider rock and she has a long history in Navajo folklore and oral traditions.  Our guide told us of stories his grandfather used to tell that Spider Woman would catch him in her web if he misbehaved. 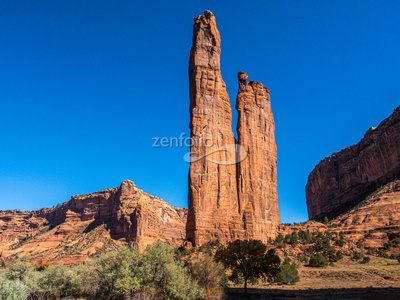 At Monument Valley Bruce and I faced a dilemma.  We wanted a dynamic cloudy sky to accent the landscape during the day and clear skies at night for star photography.  Of course we could not have both.  Mother Nature decided.  We had clear skies both day and night.  Our Navajo guided tours included two nights of star photography as well as a sunrise and sunset tour.  Since there was no drama in the sky, we opted to skip the sunrise tour.  Photography can be a fickle hobby. During the first night of star photography there was a crescent moon that illuminated the foreground but obscured the Milky Way.  The second night we departed a bit later so there would be no moon light and the Milky Way was observable but the foreground was much too dark.  Oh well! 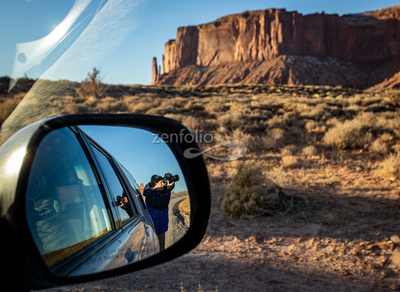 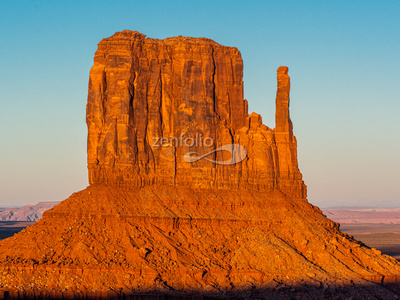 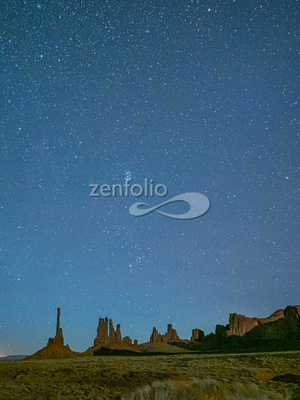 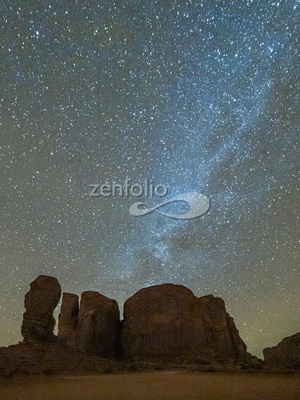