"On The Road Again"

Borrowing words from a Willie Nelson song, late August 2022 saw me “on the road again”.  This late summer road trip was with my San Diego photo buddy Bruce Hollingsworth.  Bruce had driven from San Diego to Albuquerque for a week of photography in New Mexico.  It had been three long years since Bruce and I had hit the road together.  (See the 2019 “October’s Whirlwind Tour” blog for that trip with Bruce.)  I had picked a handful of New Mexico locations for this photo adventure.  After three years of not photographing together, we easily fell back into our normal travel routine with lots of humorous conversion along the way.  I should not forget to mention that my trusty and reliable Toyota 4Runner also thoroughly enjoyed being “on the road again”.

Bruce and I started this journey literally in my backyard with a short walk to the community gate into Petroglyph National Monument.  Two species of wren forage among the lava boulders scattered along the mesa escarpment, the rock wren and the canyon wren.  In the past, I had had success with calling the birds using an app on my phone.  It worked this time as well and we were able to obtain images of both birds.  After photography, it was a short hike back home for lunch. 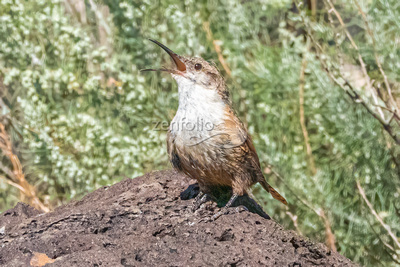 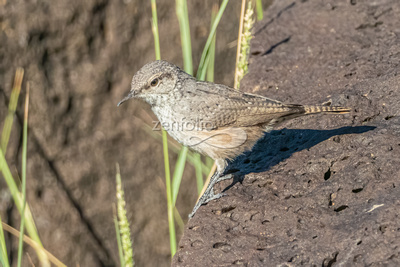 Shortly after lunch we headed west on Interstate 40 to El Malpais National Monument.  Not quite in my backyard but only about an hour and half up the road.  I had planned two photo objectives at El Malpais.  First, to photograph Mexican Short-Eared Bats as they emerged en masse from their lava tube cave, and second, some night sky photography with the Milky Way rising over the ruins of the historic Garrett Homestead.  Both these objectives were achieved. 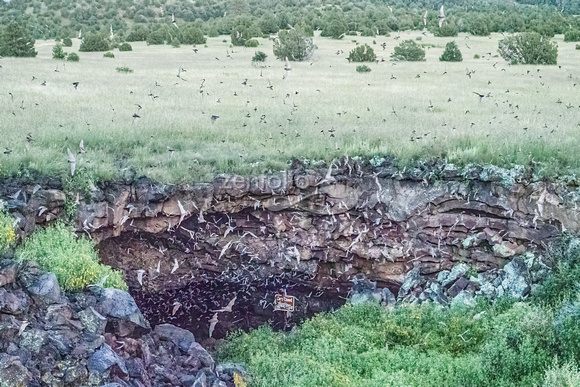 After a sleep-in the next morning, the plan was to drive to the small town of Truth or Consequences (referred to as T or C locally) and stay at the Sierra Grande Lodge for guided tours onto Ted Turner’s Armendaris Ranch.  Frequent blog readers may recall my September 2, 2021 blog where I had attempted to photograph Swainson’s Hawks preying on bats as they foraged for bugs on the Armendaris Ranch.  That was the plan also for this trip with Bruce.  Unfortunately, the plan did not work out.  Resent monsoon rains had made the dirt tracks on the ranch impassable.  Consequently, I had to improvise an alternative objective.  So, instead of touring the Armendaris Ranch, we scouted the area around T or C for a night sky photography opportunity.  Fortunately we discovered an old steel windmill within easy access of the paved road that made a great foreground for the rising Milky Way.  So, all was not lost at Truth or Consequences. 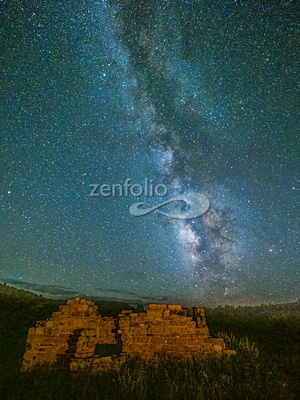 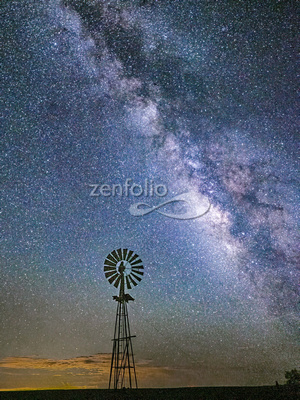 Out next photographic target was the Three Rivers Petroglyph Site.  Bruce and I had been there thirteen years ago, about the time we first started photographing together.  At that time we spent all our time on the lower portion of the petroglyph site.  This time, however, we concentrated our efforts on the “upper trail” where we had not photographed before.  There are hundreds, if not thousands, of petroglyphs pecked into the boulders at the Three Rivers site and we found and photographed many new and fascinating panels.

After our morning shoot at Three Rivers, we turned north towards the small village of Mountainair where we planned to have a late lunch.  As it turned out, much to our chagrin, there was no restaurant in Mountainair for lunch.  We did find a deli counter hidden in the back of the grocery store where cold cut sandwiches were available.  The visitor center for the Salinas Pueblo Missions National Monument is situated in Mountainair and that is where we photographed next. 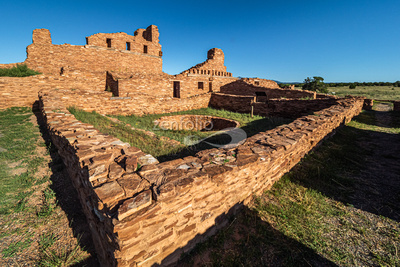 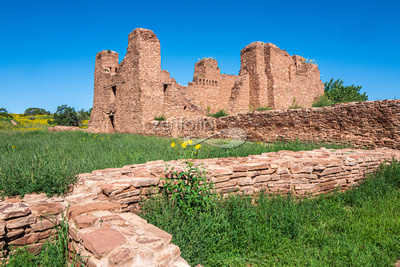 There is little light pollution at the remote location of this national monument.  As a result, I included this location on our itinerary with the intent of getting images of the Milky Way with the Abó Pueblo Mission ruin in the foreground.  Night access for photography required that I obtain a Special Use Permit from the Park Service.  During the process of obtaining the necessary permit, the park ranger suggested that if I volunteered to be a guest night photography instructor they would waive the permit fee requirement.  That was all arranged, Bruce and I would volunteer to assist with photography and the Park Service would arrange a night sky astronomy event at Abó for the evening we arrived.  I estimated that about 25 people participated in the night sky event.  Not all were photographers, but Bruce and I assisted those that were.  The evening turned out to be highly successful.  The Park Service was happy, Bruce and I were happy, and event participants were happy. 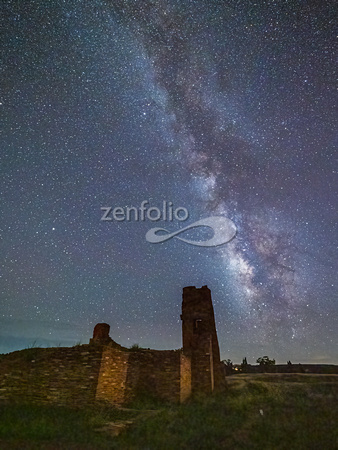 We spent the night in Mountainair at a funky roadside motel with few amenities and the constant rumbling of freight trains going by.  Needless to say, that was not a happy night.  We headed back to Albuquerque after that for a more restful night.  The next morning we were off again, this time north to the Santa Fe and Taos areas.  We photographed at a couple of other petroglyph sites.  The first was the La Cieneguilla site near Santa Fe, and the second was the Mesa Prieta site near Taos. 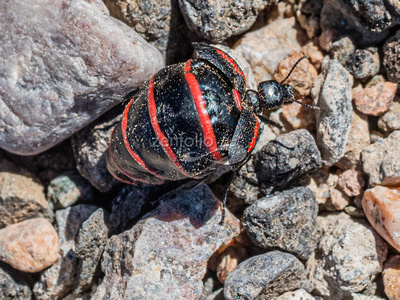 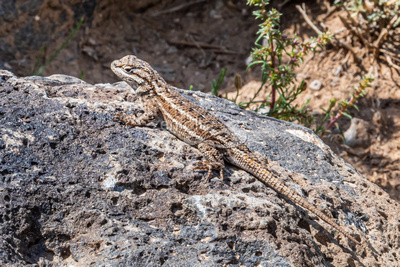 The Mesa Prieta Petroglyph Project (aka The Wells Petroglyph Reserve) is on private land and only accessible with a tour.  The site has an extensive collection of unique, undamaged petroglyph panels and I had wanted to photograph them for some time.  Fortunately, private tours were being offered again after a two year Covid hiatus.  Tours consisted of two hour hikes over boulder strewn hillsides.  I had arranged for two private tours, one in the afternoon and one the following morning.  Our docent guide was Cathy and her knowledge of local pueblo history and insight of the petroglyph panels made the tours very special. 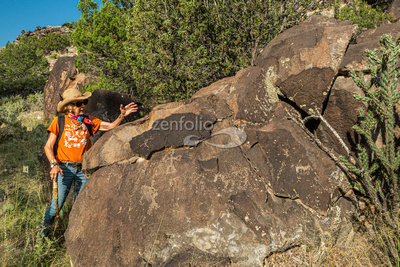 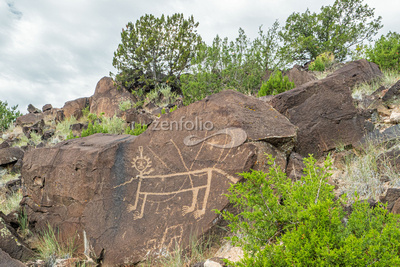 We concluded our week of New Mexico photography by visiting the Highway 64 steel bridge over the Rio Grande Gorge for some panoramic compositions.  Also open again after two years of Covid shutdown was the Taos Pueblo were we spent an hour or so as our last photography location.  After learning about the pueblo and its people, we packed up the photo gear and set the GPS for 9104 Lake Isabella Way Northwest.  Early the next morning, Bruce slid into his German made luxury sedan, set the cruise control for highway speed, and enjoyed his ride back to San Diego.  In retrospect, it was totally sweet for me to be back “on the road again”. 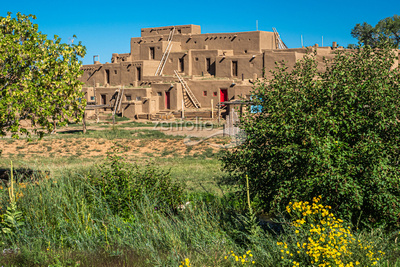 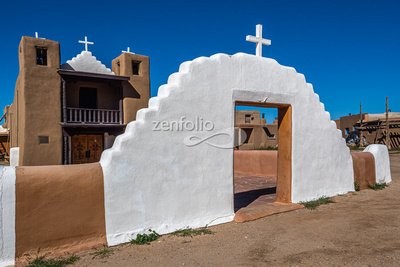 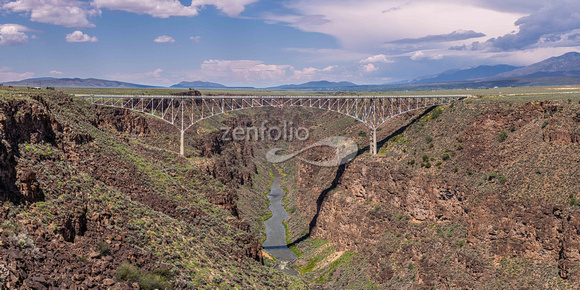