The morning Qantas flight from Brisbane got us to Hobart, Tasmania, early enough to check in at the historic Lenna Hotel and do some exploring along Hobart’s waterfront.  We had actually arrived in Hobart the day before our three-day, private, Tasmania tour with Luke O’Brian Photography and packed as much exploring as we could during our day-and-half in this provincial capital of Tasmania.  That afternoon we walked the fashionable Salamanca Place, a redevelopment area with restored warehouses that now contain shops, galleries and upscale restaurants.  Around four o’clock that afternoon we happened upon the Pearl & Co., a waterfront oyster bar and restaurant, during their happy hour and stopped in for a glass of wine then stayed for dinner. 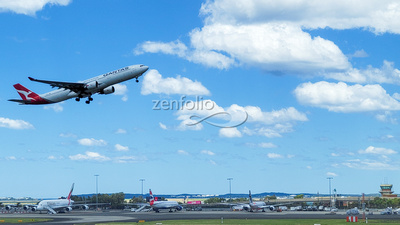 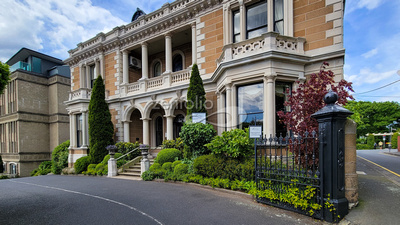 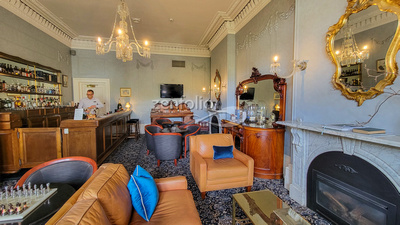 After breakfast at the small, bustling, but cozy Harbor Lights Café, we joined a walking tour, which Jane had arranged ahead of time, around Hobart’s historic downtown.  Like much of mainland Australia, Tasmania was first colonized and developed by British convicts.  After years of being downplayed, this unique history is now being touted with statues and informative plaques on buildings. 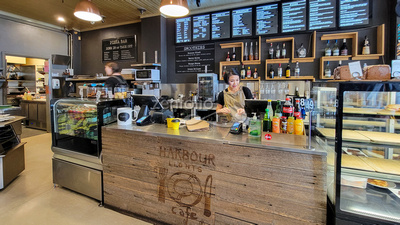 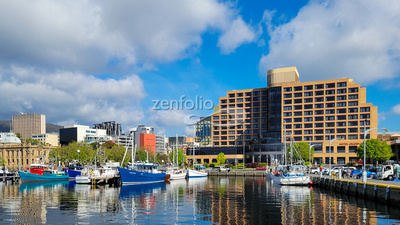 Later that afternoon, we learned that public tours were offered at the Tasmania Parliament House and, on impulse, decided to take the tour.  As it turned out we were the only ones on the tour that day and enjoyed the personal attention given us by our guide, a legislative analyst.  We visited the House of Lords chambers and those of the House of Commons, both simply decorated in an ornate, governmental sort of way.  We learned a lot about Tasmania’s system of government and voting process, most of which I have already forgotten.  Evening cocktails were enjoyed in the hotel lounge that reminded me of an old gentlemen’s club, often seen in British movies.  Dinner that night was seafood pasta at an Italian restaurant on Salamanca Place. 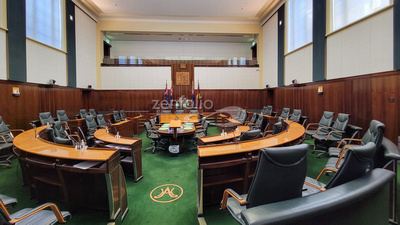 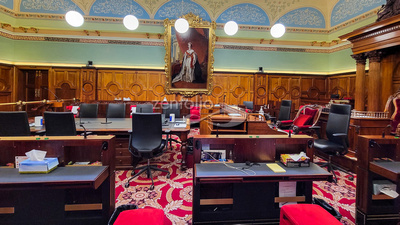 Tuesday morning, November 8th, day 43 of our Australian Odyssey, was when Luke O’Brian picked us up at the hotel to begin our Tasmania photo adventure.  I was very much looking forward to some landscape photography after beating the bushes for birds in New South Wales, Northern Territory, and Queensland.  Cradle Mountain was our destination.  We made a refreshment stop at Ross, a small village in Tasmania’s Midlands, along the Macquarie River.  Ross exemplifies Tasmania’s convict heritage with the historic Ross Bridge over the Macquarie River having been built by convicts and the historic Ross Female Factory, a workhouse where thousands of female convicts worked in the mid 1,800’s, now a UNESCO World Heritage Site.  Luke also made a short detour on our way to Cradle Mountain to drive through Sheffield, known as the Town of Murals. 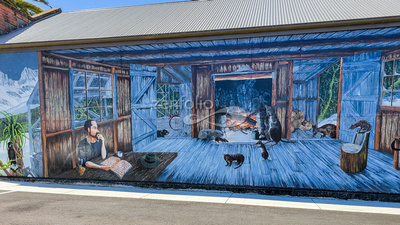 Cradle Mountain Hotel was our home for the next three nights. After checking in and a short respite, Luke and I headed to Dove Lake for some night sky photography.  Jane opted to take a break from activities and stayed at the hotel.  Luke and I arrived at Dove Lake in plenty of time to get in some sunset photography of Cradle Mountain reflected in the still water of Dove Lake.  As dusk and darkness approached we changed our vantage point to increase our chances of getting a shot at the Milky Way, although this time of year at Cradle Mountain the Galactic Center would be below the horizon.  As darkness crept in so did a full moon start to light the sky.  Conditions were perfect for night sky photography with a clear, cloudless sky and windless conditions for a glassy lake surface.  Only the bright full moon was problematic with its light obscuring the intensity of distant stars.  Just as we resigned ourselves to a wasted effort, the night started to get darker as the moon entered into full eclipse.  What an unexpected surprise that was. 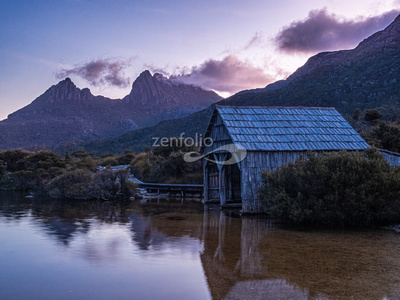 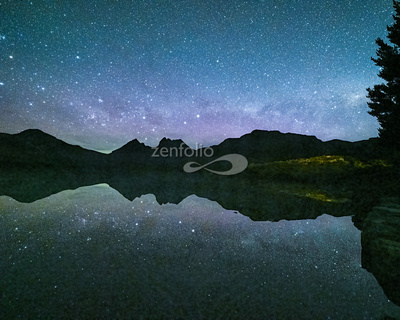 We spent the next two days hiking and photographing rain forest scenes, wildlife and waterfalls around Cradle Mountain.  A couple of return trips to Dove Lake were made to photograph at sunset with marginal success as a colorful cloudy sky never appeared.  We visited the Devils @ Cradle, a Tasmanian Devil Sanctuary and got some photos of the infamous Devils, although in captivity.  During our time at Cradle Mountain, Luke escorted us to an area that Wombats frequent.  Jane and I both developed an affection for these small, cuddly marsupials with their squatty frames nibbling away at the tussock grasses.  Like all grazing animals, they rarely looked up from their constant foraging, and it was difficult to get a facial portrait. 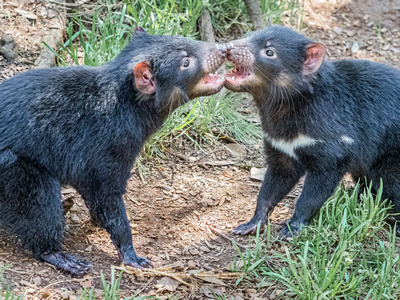 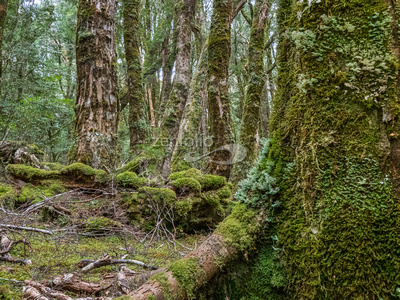 Evolution creates unique solutions to ensure survival of a species and the wombat is a great example.  Wombats live in long, deep burrows that they dig with dirt being kicked out behind them. If wombats had belly pouches like wallabies and kangaroos, all that dirt whipping by the pouch would have been lethal to developing joeys.  Evolution solved that problem for wombats by creating a backward facing pouch that protects joey wombats from flying dirt.  On one of our hikes among wombats, we observed a developing joey stick its head out of the rear facing pouch. 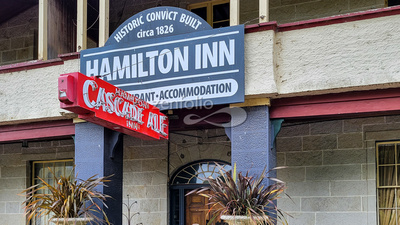 Our Cradle Mountain adventure ended all too soon.  Luke drove us back to Hobart via Queenstown, with substantial buildings constructed by convicts, Nelson Falls and Lake St. Clair.  He dropped us off at the airport Travel Lodge where we spent the night before flying back to Sydney the next day.  In Sydney, we spent the night at the airport Rydges Hotel to repack and organize for our next day’s flight back to San Francisco and eventually Albuquerque.  We arrived home on Monday, November 14th after 50 days of travel. 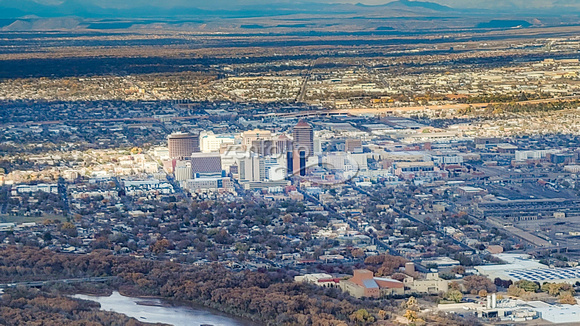