The American Automobile Association (AAA) predicted a robust return of vacation travel this summer with nearly fifty million travelers forecast to take to the roadways and skies.  Jane and I were willing participants in this enormous bubble of holiday travelers.  Our destination, along with throngs of other vacationers, was Glacier National Park.  In anticipation of record high visitations, the National Park Service limited visitors to the park by instituting a new ticket requirement for access to the Going-To-The-Sun Highway, the primary entry into the park.  We did not learn of this restrictive entrance requirement until it was too late for us to obtain a special ticket.  The only way for us to gain entry into the park by way of the Going-To-The-Sun Highway was to pass the park entrance station before six AM.  That meant getting up at 4:45 AM and hustling out of the cabin. 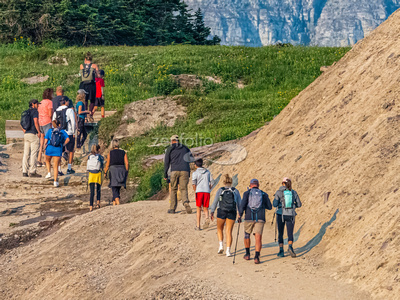 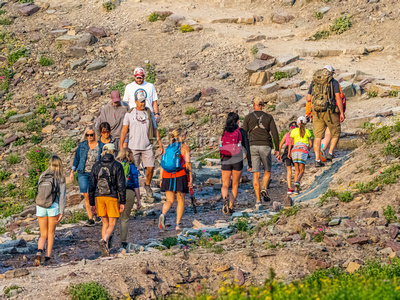 We were a week at our time-share cabin at Glacier Wilderness Resort and only made the super early run into the park twice.  Each time the objective was to reach Logan Pass in time to obtain a parking spot before rangers closed the parking lot.  The Hidden Lake Overlook trail that starts at Logan Pass has always been a good location for spotting the park’s varied wildlife.  This time was no exception as we enjoyed watching and photographing bighorn sheep, mountain goats, hoary marmots, Columbia ground squirrels and the ubiquitous golden mantled ground squirrel.  Being on the Hidden Lake Overlook trail in July provided us the chance to observe some animal family interactions.  I was photographing a large, adult hoary marmot when I noticed one, then two and eventually three pups cavorting around the area. 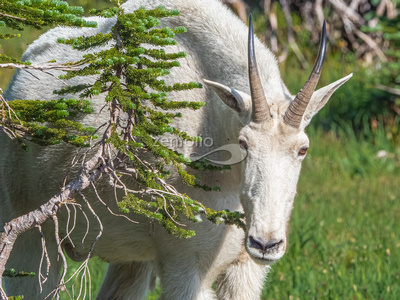 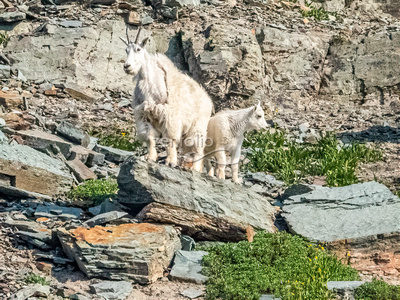 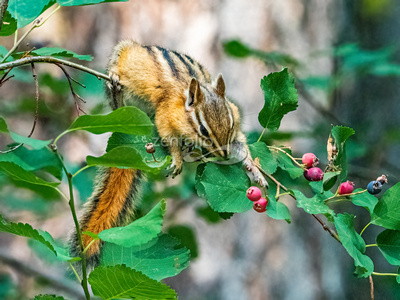 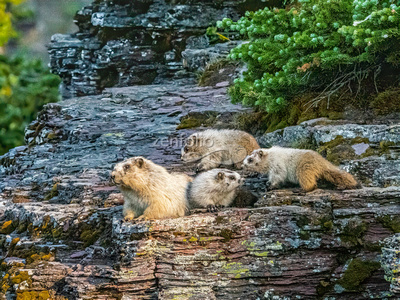 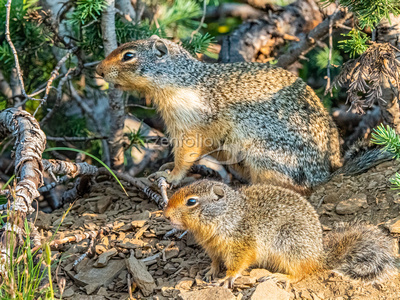 There are two areas on the east side of Glacier National Park that can be visited without the special ticket required for the Going-To-The-Sun Highway. So, after checking out of our time-share, we moved for a couple of days to the Glacier Park Lodge, built in 1913 by the Great Northern Railway, on the east side.  Two Medicine and Many Glaciers on the east side were inundated with visitors, who like us, did not have a special ticket.  We were turned back by park rangers during out first attempt to enter the park at Two Medicine because there were no parking spaces left.  It was suggested we arrive at this entrance early in the morning and that is what we did the second time. 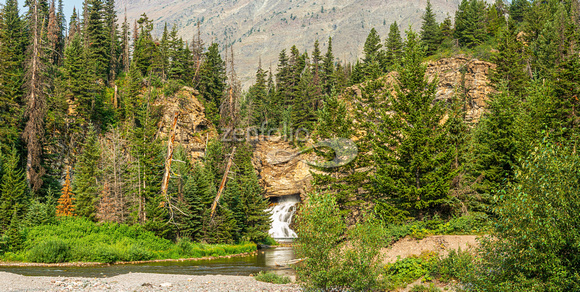 One of the scenic locations at Two Medicine is the Running Eagle Falls, a short walk from the parking pullout.  We made that our first stop and because we had arrived early, there were only a couple of cars there.  While photographing the falls, I noticed an American dipper flying along the water flowing from the waterfall.  Dippers are somewhat difficult to find because of their high elevation, clear stream habitat.  Obviously, I had to spend some time locating and photographing this bird.  It was “eagle eye” Jane, however, who spotted them first and had to point me in the right direction.  Eventually I was able to get some good images of the dipper, including a recently fledged immature bird being fed by an adult.  By the time we left Running Eagle Falls the parking area was full and numerous cars were parked along the shoulder of the road. 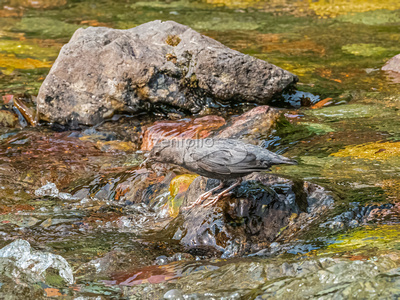 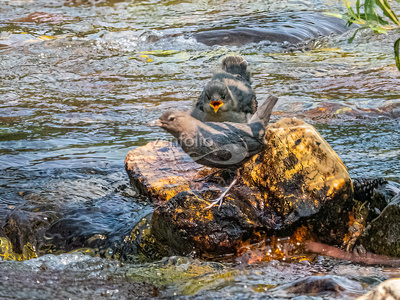 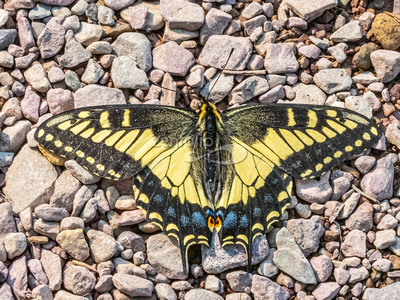 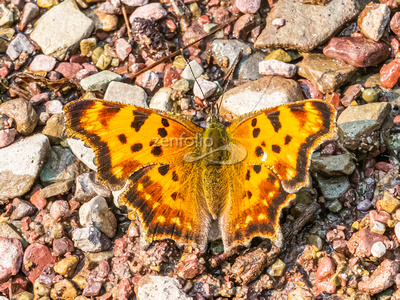 From the Glacier Park Lodge to Many Glaciers is normally a little over an hour’s drive.  This year, however, the entrance road from Babb to the park entrance station, an eleven mile stretch, was under construction, making this section of the route dusty, bumpy and slow.  When coming to Glacier National Park, we usually include a visit to Many Glaciers because we have had fairly good luck in finding large mammal wildlife there. 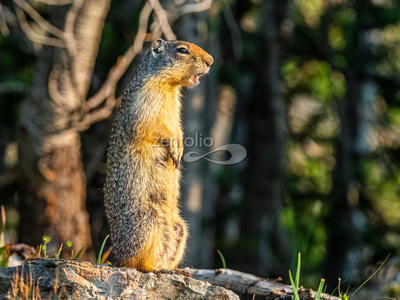 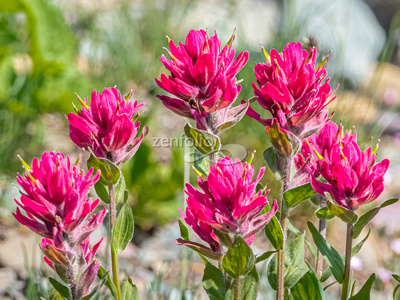 Fishcap Lake, a short hike from the Swiftcurrent Lodge parking area, is where moose are frequently seen and that was our objective.  We checked out Fishcap Lake for moose twice.  The first time, we got there mid-morning and it started to rain shortly after we arrived.  We were not prepared for rain and settled ourselves under the protective canopy of trees along the shore of the lake and waited, and waited.  We were far from being the only moose watchers along the edge of the lake.  Other likeminded visitors were practicing patience waiting for one of the big animals to appear.  Finally after more than an hour of waiting, the call “moose” went out from somewhere among the spotters along the lake. A female moose and calf had come out of the forest at the far side of the lake.  She and her newborn scurried along the edge of the lake for a few seconds and disappeared from view among the willow bushes.  Only if you happened to have your camera pointed in the right direction could a shot be obtained while the moose was in the open.  Fortunately, my camera and I were looking where the moose appeared and was able to get an image of the adult and calf trotting along the edge of the lake. 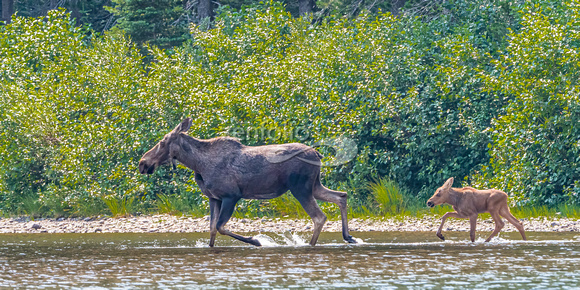 We arrived in the early morning for our second visit to Fishcap Lake.  It was a gorgeous sunny morning with brilliant reflections in the lake water, just the kind of morning you would love to have a moose walk into the lake.  Well that did not happen.  I waited and waited for more than three hours before my patience ran out.  Jane had the good sense to leave long before I did to relax at the Lodge.  The only distraction that occurred while waiting for a moose to appear was that a large spotted frog had jumped into the lake right in front of us.  It had been startled by a hiker passing by and offered some photographic relief during an otherwise boring morning. 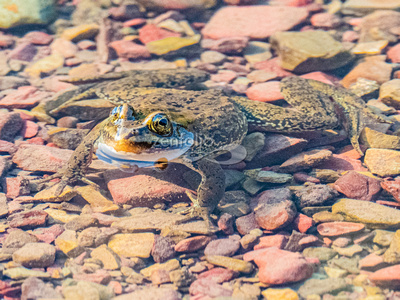 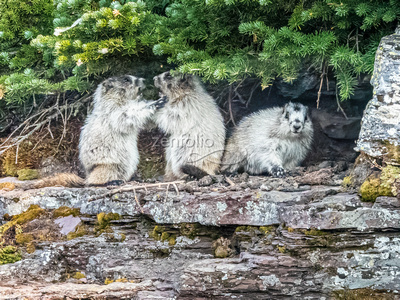 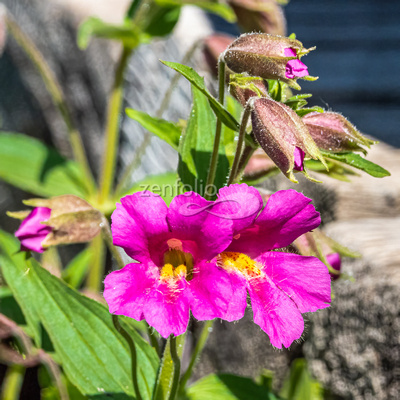 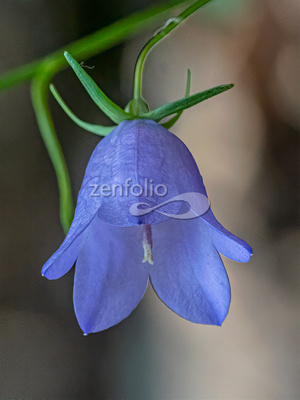 Glacier National Park is a special place and we enjoy every visit.  This July visit was unique.  Most of our visits to the park have been in late September.  Turned out that one of our neighbors also has a time-share at Glacier Wilderness Resort and we traded our time in September for their time in July.  This visit provided us a different view of the park with colorful wildflowers, instead of the golden aspen trees of fall, and young baby animals, instead of the larger grown up animals intent on bulking up for the winter hibernation.  I would be remiss, however, if not mentioning that this visit in July was hampered by extremely smoky conditions from the many wildfires in the west.  We felt sorry for first time park visitors who were not being able to clearly see the grandeur of the peaks and valleys of the great Rocky Mountains.

Other images from this trip have been added to the Glacier National Park sub-gallery in the National Parks and Monuments main gallery.