Jane and I started twenty-seventeen with a super “vacation”, two weeks in Hawaii.  Jane and I have a special definition for “vacation”, it is a trip without any photography gear and all photos are taken with either a cell phone or small snap shooter camera.  We have lots of other trips in store for this year, but these two weeks were a “vacation”.  We were fortunate in being able to arrange a time-share trade for two consecutive weeks, the first week on Maui, the Valley Isle, and the second week on Kauai, the Garden Isle.

We flew non-stop from San Diego to Maui and enjoyed the first week of our vacation in a one bedroom condominium at the Maui Schooner Resort in Kihei.  Jane was able to score a great price for an off-airport car rental.  Anyway, that is what we thought.  The price was really good, at least one hundred dollars less for the week than a convertible from the major car rental companies at the airport.  But the good price was not because of the location, it was because the cars were old and a bit beaten up.  Before departing the rental agency, we thoroughly inspected the vehicle and noted all the dings and scratches on our rental form.  You know how it is with car rental companies, they will charge through the nose for any little thing they can get away with.

So we were more than a bit shocked and concerned when a large, fresh ding appeared on the driver side door.  It was really bad looking, deep and with paint from the culprit vehicle embedded on our door.  Then, as I pulled out of the parking space at the resort, we heard a loud scraping sound coming from the front of the car.  We quickly got out of our seats to inspect what was causing this horrible noise. Turns out the front bumper assembly had become dislodged and the entire fiberglass unit was hanging down and scraping on the ground.  Immediately we could see the insurance deductible becoming part of our vacation cost.  We were able to, sort of, wedge the unit back into place, although we had to do that several more times over the next few days.

Before returning the vehicle to the rental company we cleaned up the ding with cleaning solvent from the condo to where it looked as old as all the other dings on the door.  We also manipulated the bumper assembly back into place as best we could and started feverishly thinking of ways to avoid paying for damages.  When we got to the rental place we were hyped and ready to do verbal combat with the agent.  When we explained about the bumper, the agent casually told us “you should have called and we would have replaced the car.  These are old cars and we know things can go wrong”.  What a relief that was! 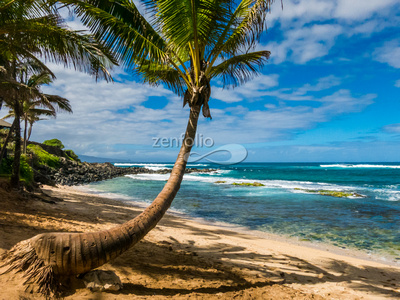 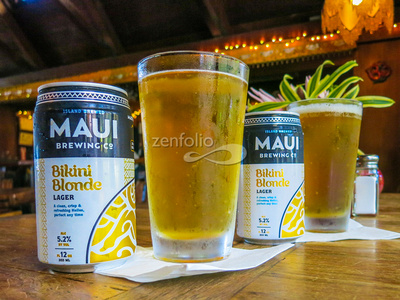 Otherwise, our week on Maui was very relaxing.  We had a pool-side unit and spent a fair amount of time in the Jacuzzi and lounging around the pool.  One of the other guests at the Schooner Resort told us about Polo Beach and the ocean front walk in the area.  We enjoyed that hour-long walk along the swanky hotels and apartments several times.  We also followed up on suggestions from friends at home and snorkeled around Molokini Island with Trilogy Sailing and watched a slight-of-hand magic show in Lahaina.  Of course we could not return home from Maui without having made the drive up to the Haleakala volcanic crater (although we did not do the sunrise thing). 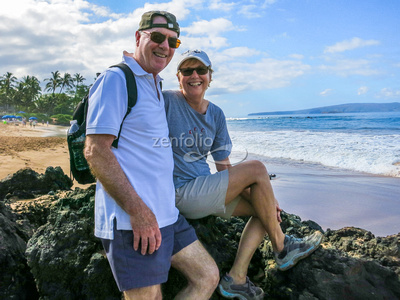 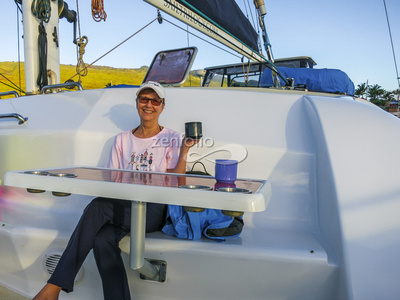 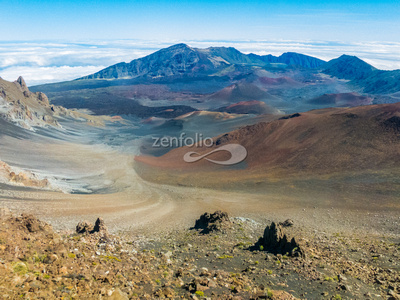 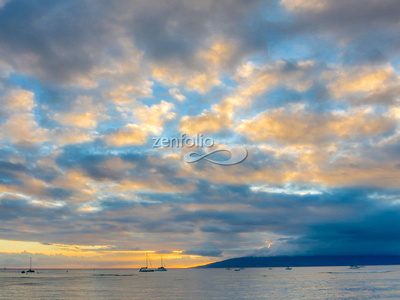 Our next week was spent at the Cliffs Resort in the planned community of Princeville, along the north shore of Kauai where we enjoyed the comfort and space of a large one bedroom, two bath unit.  Princeville is a bit remote from other population centers on Kauai so we planned most of our activities in and around very upscale Princeville.  For Kauai, Jane had arranged much better transportation.  We enjoyed top-down touring in a new, bright yellow Mustang convertible.  No problems with this vehicle! 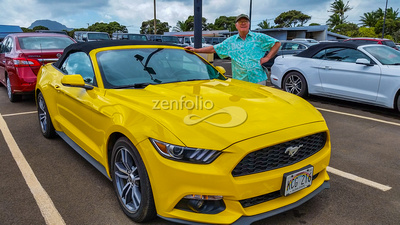 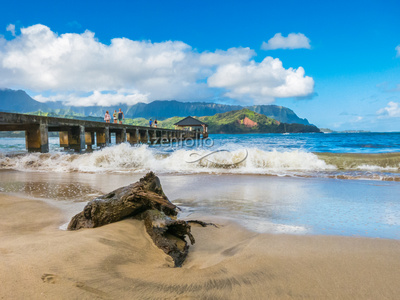 In addition to exploring the beaches at Hanalei Bay and Wainiha Bay we also imbibed happy hour drinks at the Hanalei Bay Resort, about a half hour’s walk from the Cliffs.  We toured the entire island of Kauai via Sunshine Helicopters right from the Princeville airport.  The flight included Waimea Canyon, Na Pali Coast, and now famous Manawaiopuna Falls, aka “The Jurassic Falls”.  The bird’s eye view of the island’s steep, vegetation covered terrain from the comfort of the helicopter was very cool! 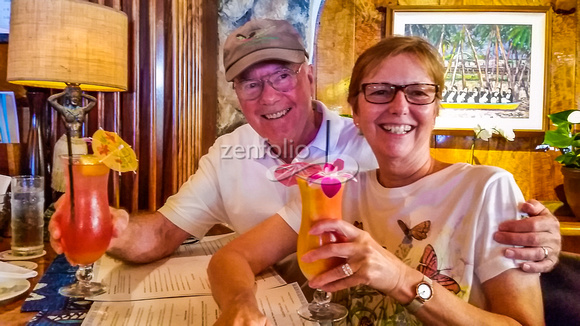 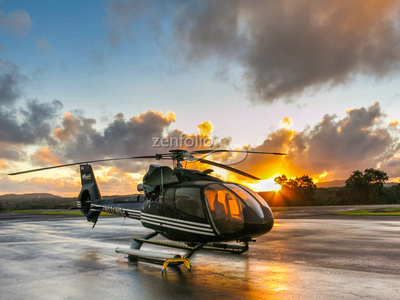 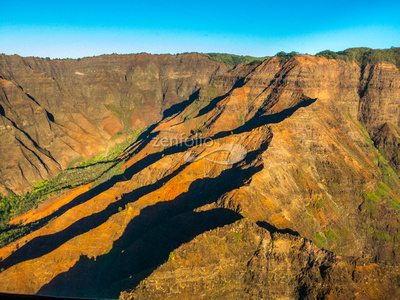 Another very cool experience was our three hour tour of the Princeville Botanical Gardens.  The botanical garden was actually developed by a couple from San Diego, Bill and Lucinda Robertson, who had intended to retire on Kauai and instead spent years creating a fantastic garden.  Our guide, Harald, a former children’s book publisher from New Mexico, was extremely knowledgeable about all the various varieties of trees, plants and flowers encountered along the tour.  One of the tour highlights was a presentation of how cacao beans are processed into chocolate that included tasting samples of chocolate with varying cacao amounts.  We also found, by word-of-mouth, a five mile hiking trail through a mahogany plantation.  The area had previously been a sugar cane plantation and the trail took us past an old stone dam and canals built to float the cane to the processing plant.  Rain pelted us as we hiked back to the canary yellow convertible. 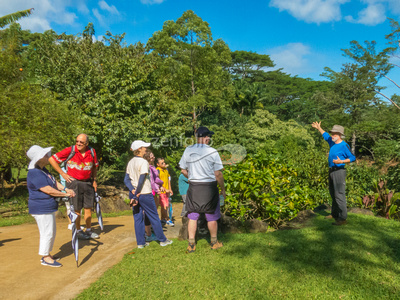 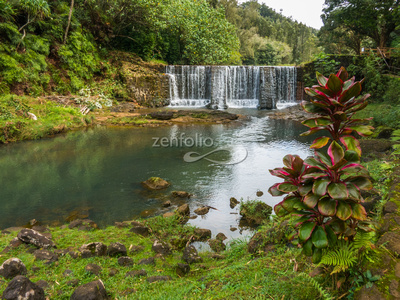 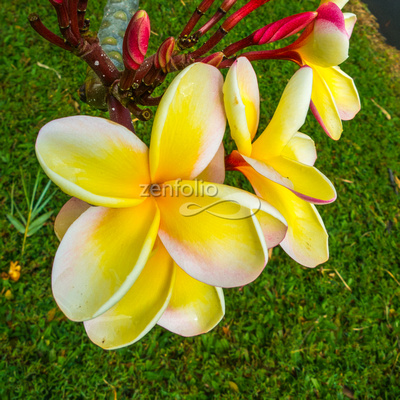 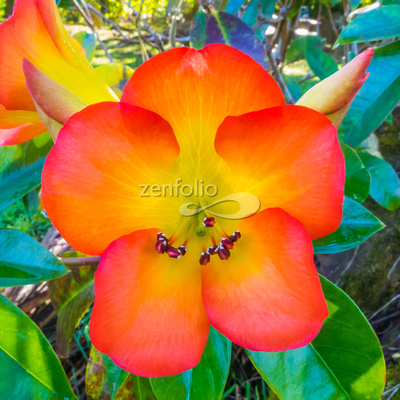 The concierge at the resort offered us a two-for-one price for a very expensive, all inclusive (open bar and shuttle service to and from), luau for agreeing to sit it on a timeshare presentation.  The sales person tended to be a bit narcissistic and talked mainly about himself and that he did not care whether or not we purchased a timeshare since he was retired and did not need the commission.  So after a half hour we let him know that we were not interested, and since he didn’t care, we should cut the sales session short.  That proved to be a very profitable half hour for us as we had a lot of fun at the luau and enjoyed several Blue Hawaiian cocktails (with Vodka instead of Rum). 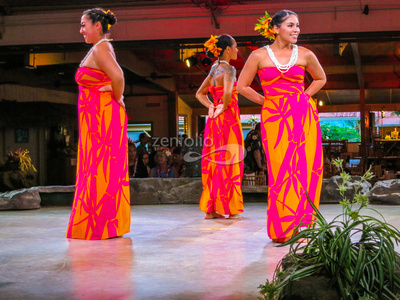 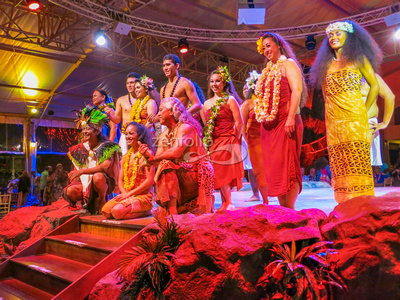 For a wildlife enthusiast like me, one of the more fascinating experiences in Princeville was our encounter with the Laysan Albatross.  It seems that the cliffs along the north shore of Kauai are the ancestral nesting sites for the Laysan Albatross and other sea faring birds.  Now, these birds instinctively continue to come to these cliffs to raise chicks even though the area is covered with million dollar homes.  The albatross have adapted well to their new surroundings.  We observed them exhibiting their natural behaviors in people’s front yards as we strolled through the neighborhood streets.  In addition to the albatross, we added several new bird species to our list.  The most common bird encountered was the red junglefowl, ancestral to the domesticated chicken.  They were everywhere on Kauai. 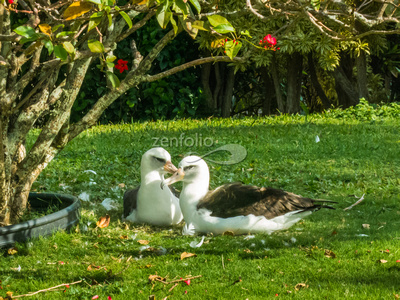 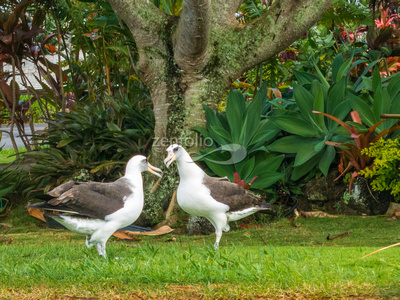 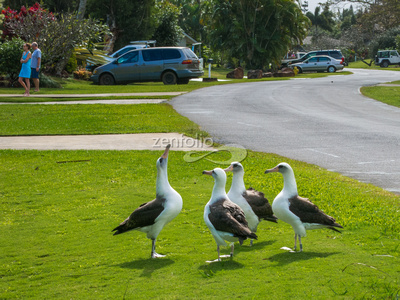 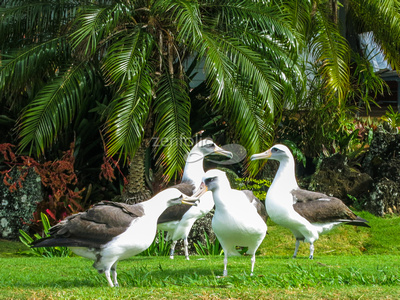 Of course, all great “vacations” must come to an end and after our week on Kauai we headed back to San Diego.  Upon arriving back on the mainland, we learned that San Diego had experienced more rain during the time we were gone than in any other similar period in the city’s recorded history of rainfall.  That news made our two weeks in Hawaii even more special.